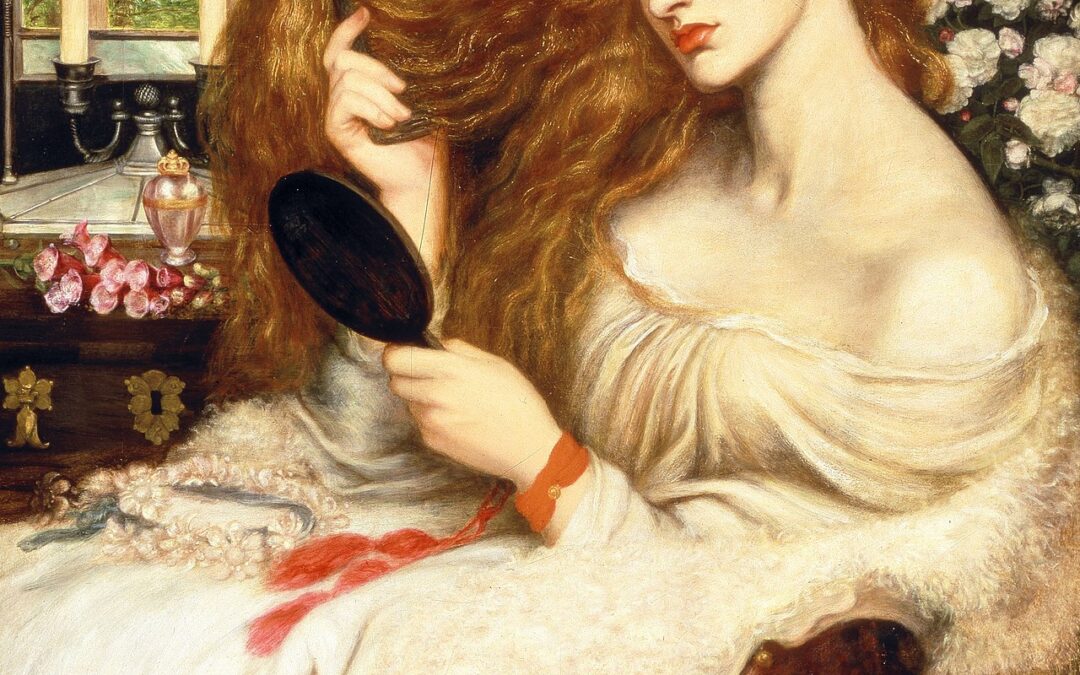 Possibly empress or queen of Hell, sometimes mother of Vampires

Lilith made a very brief appearance in the pilot episode of “Hazbin Hotel” in a family portrait, along with protagonist Charlie and her husband, Lucifer. At present the king and queen of Hell are background elements that haven’t yet been brought back to life, but the “Hazbin” series is still in its pilot phase, so in a few weeks, we may meet them in person?

Lilith and Lucifer, from Hazbin Hotel 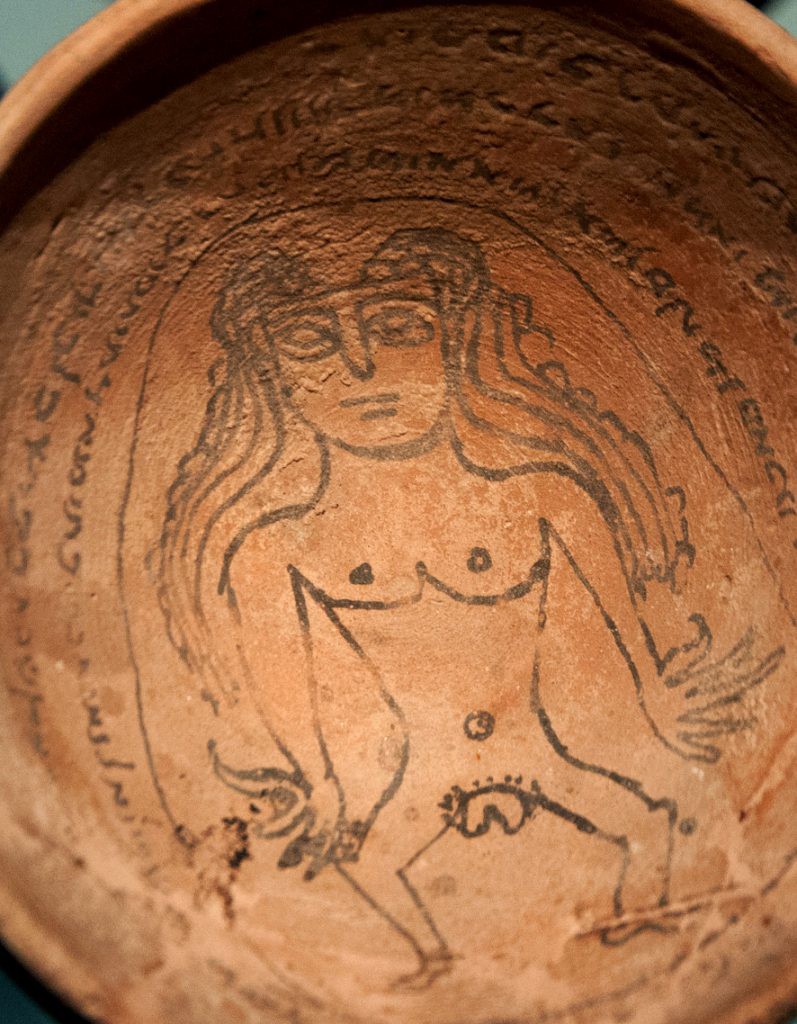 Where to begin….Lilith, or at least the category of demons she came from, are ancient. The “lilitu” (male: Liliu, female: “lilin”) are night demons from Mesopotamian lore, their names sometimes translated or used interchangeably with the word for owls. Her role as a named demon grew over time,  and although she only barely appears in the bible (Isaiah 34 mentions “lilith” in a general sense, along with a few other demons and wilderness creatures who haunt the ruins of fallen Babylon) she really comes into her own in the rabbinical tradition in the Middle Ages.

The story of Lilith as Adam’s ex wife, and creation’s first and most complicated “it’s complicated” relationship, largely come from a satirical book, the Alphabet of Sirach, which tells how Lilith was created at the same time as Adam and as an equal to Adam, but didn’t want to be locked into a submissive position in bed, so she escaped after learning the magic of the secret name of God, and became, effectively, a child-stealing wind demon. In many ways she was everything that was frightening to the patriarchal religion she sprung from.

The Zohar, a foundational Kabbalistic text from around the 13th century, has a more complex and apocalyptic view of Lilith. Bear with me, this gets a little complex: in the Kabbalah’s tree of life (the Sefirot), nine nodes funnel divine energy through various branches through a sort of creative engine, ultimately pouring energy out of the lower node “Yesod” through “Malkuth” at the base and through that, to earth. In some complicated way that made sense at 3:30 in the morning, this tree is tied to the name YHVH, the name of god. At the fall of man and the rebellion of Satan’s angels, the engine broke, and the energy of creation was shunted to the more earthly, somewhat corrupt, occasionally evil reflection of the tree of life, the Qlipoth, and the power ruling over the final power dynamo: Lilith. In this mythology, she separates God from Earth, perpetually the Other Woman…and only through some cosmic reconciliation will this energy be restored and the world restored to God’s kingdom. Or something along those lines, anyway. It’s a lot for one demon to carry on her shoulders!

What Lilith got up to after she left Adam is pretty controversial. She likely shacked up with the archangel/demon prince Samael (one of several spirits that may have become Satan). Around that time, her sisters (daughters? granddaughters? alternate identities) Agrat Bat Malat Eisheth, and Naamah, were all in an extremely complicated relationship with Samael, who himself seduced Eve at least once (and Naamah also got with Adam at least once). There’s also a story floating around about how Lilith gave Eve some of her beauty. While Samael is often demonized as the one that caused Adam to eat the fruit and therefore put a huge crack in creation, Adam/Eve and Lilith/Samael are often seen as light side/dark side versions of each other, and perhaps after the fall…which could very easily have been ordered by God…they could easily have comforted each other in the wilderness. Samael is related to Azazel, one of the “watcher” demons who corrupted, but also taught many important secrets to, humanity.  There’s a lot of secrets and lore that could be tied up in this first complex relationship. And it probably made several demons and possibly Eve quite upset when God had Samael castrated, just saying.

Over the centuries, Lilith stayed in the “bad girl, other woman, baby stealer” role, though there were a few sympathic notes to her character: she was cursed that hundreds of her children would die every day. When she sees her name in a ward near a child she remembers some of her vows, and leaves the child behind or heals the harm she’s done, so there’s something of a mother spirit still in her.

On the subject of strange bedfellows, Lilith is generally seen to have been a consort to Samael. But Samael’s myth is tied up in the story of the Leviathan, who was also castrated (or killed) so its offspring would not overrun the earth, and Lilith is specifically named the “female leviathan” in a 15thish-century caballic text. And she’s also associated with both menstruation and the tempting serpent of Eden in this passage from the Teratise on the Left Emanation::

…”And the Serpent, the Woman of Harlotry, incited and seduced Eve through the husks of Light which in itself is holiness. And the Serpent seduced Holy Eve, and enough said for him who understands. And all this ruination came about because Adam the first man coupled with Eve while she was in her menstrual impurity – this is the filth and the impure seed of the Serpent who mounted Eve before Adam mounted her. Behold, here it is before you: because of the sins of Adam the first man all the things mentioned came into being. For Evil Lilith, when she saw the greatness of his corruption, became strong in her husks, and came to Adam against his will, and became hot from him and bore him many demons and spirits and Lilin.”

Lilith is a truly complicated figure: a human and a demon, “the first eve” and mother of demons, but also, possibly a mother of humanity too; a figure representing female empowerment and a totem of corruption. She’s the first and best-known succubus, who preys on males through sexual dreams. She’s a howling monster and vampire, and a seductive goddess. She’s the mother of witches, adopted as a spirit of female freedom.. She carries ancient fears and modern hopes. If you use her in your writing, remember that she’s a goddess, and may have always been one, and is possibly the path that all of humanity could have taken.

Oh! Is Lilith a member of the Goetia? Probably not as it’s defined today, but In Pandemonium Jake Stratton-Kent suggests that the remnants of four demon queens can be seen in some earlier demon lists, and the demon “Beleth” or “Bilith” might have Lilith in his ancestry. Given how quickly Goetic demons change their clothes, names, and genders, it’s certainly possible.