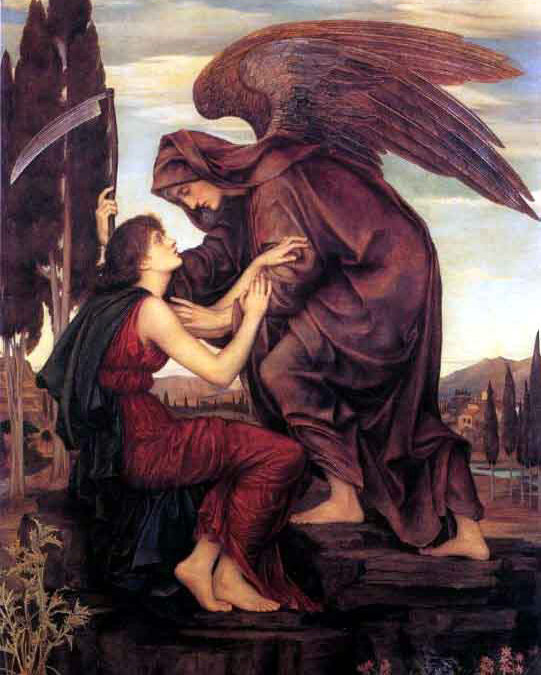 The Angel of Death, Mashit the Destroyer, Satan the Accuser, The Venom of God, The Demiurge/Creator of the Material World, The Left Hand of God, the Blindness of God

Chief of All Satans

Samael as the Gnostic Demiurge

As an Archangel, he’s presumably blond and stately. Moses (?) describes him as 500 parasangs (about 2000 miles) high, made of chains of black and red fire, studded with glaring eyes. Sometiems a twelve-winged seraph riding a serpent. Possibly cross-eyed and dark, with horns.

In the Old Testament, Samael may have been the destroying angel of God, the sort of spirit that would have killed all the firstborn sons of Egypt, that sort of thing. He is also strongly associated with Satan, and is sometimes described as the angel that would not bow to Adam and tempted Eve to eat the forbidden fruit. He is commonly described as “the adversary” (or, satan, lower-case s), an obstacle and challenge to humanity, though one that is in service to God. Various Jewish and Islamic traditions describe him as the angel that wrestled with Jacob, the angel that told Abraham to sacrifice Isaac. Heck, he even planted the tree that bore the forbidden fruit, and how bad is that?

Over time, the entire category of “angels of death and destruction” seems inevitably to fall., and Samael over time became one of the best-known demons. In one of his biggest speaking roles, he’s described in the Gnostic Apcryphon of John as one of the names of the Demiurge, the powerful, but corrupt, god that created the earth…bearing in mind that in Gnosticism “created the earth” is a bad thing, as the earth is distanced from god. In this role he appears as a lion-faced certpent, and merges with the idea of the devil.

He also was in a very complex polyamorous arrangement with Lilith, three other major demons./angels of sacred prostitution (Esheth Zenunium, Agrat Bat Mahlat the “roof dancing demon,” and Za’amah. In some stories this very complex relationship also included, at times, both Adam and Eve, though rarely on the same day (apparently, Samael was Cain’s father?) Lilith may have had a number of semidemonic children by Samael, and God, ultimately, had him castrated (which says a lot about whether angels and demons have gender.) Na’amah later seduced…again, complicated relationship. Lilith and Samael are sometimes seen as the dark reflection of Adam and Eve.

Samael’s nemesis is the archangel Michael, who may have had the same origin as Samael, both are perhaps tied to a gnostic snake cult. Several internet sources suggest that Samael is an old Syrian god, perhaps a rare case of a god becoming an angel? And in fairness, Samael has never quite stopped being an angel, depending on what grimoire he’s listed under. As the “Left Hand of God,” he may simultaneously define what it is to be a demon, and what it is to serve God. Complex character.