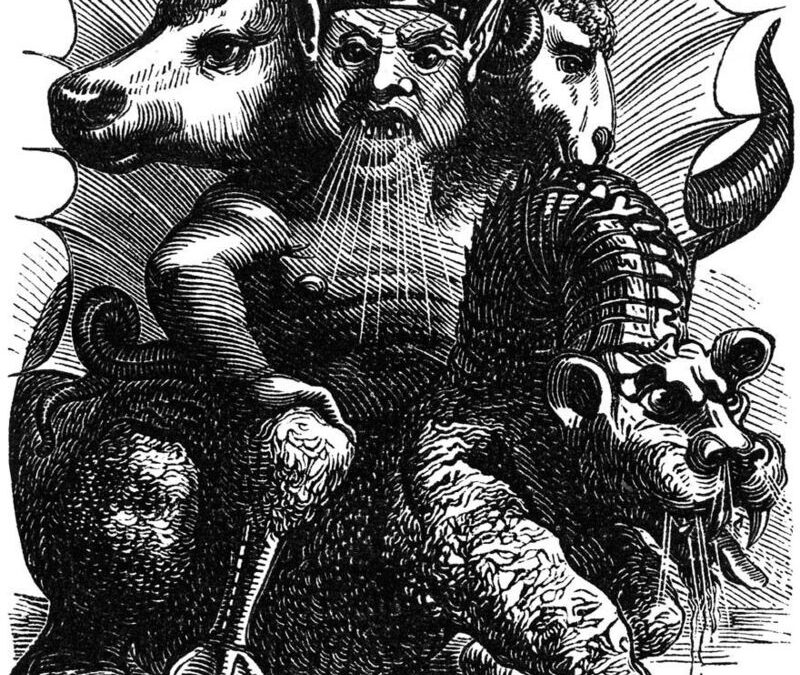 Asmodee, Asmoo, The Prince of Lust, King of the Demons

Asmodeus appears as the prince of lust in the series one finale, where he’s disturbed by two of the main characters who are clearly in love. Lust and love, not the same thing. His appearance is drawn from the Dictionairre’s description, with his sheep and bull heads highly stylized, and his human…ish…mouth glowing with fire. Can take a range of forms, but often walks wihth a limp and has one clawed foot. In the Dictionairre Infernal he’s a hodgepodge chimera with three heads (fire-breathing man, sheep, bull), serpent tail, riding a dragon-lion.) Each of these, acording to the Dictionairre, are symbols of lust, but most things are, really…

Asmodeus is ancient, and has some particularly entertaining mythology: in the Book of Tobit he had gotten into the habit of stalking the character Sarah, bumping off seven husbands on their wedding nights. The eighth husband got some advice from the angel Raphael, burned some fish parts, and created a smoke that drove the demon away. From this story and others he picks up the title of demon of lust.

In the Binsfeld hierarchy of Demons, Asmodeus is listed as the prince of Lust, but he’s also been associated with wrath and revenge. Interestingly, he’s listed as the master of Hell’s casinos, but that’s at least in part due to the quirky demonologist Berbiguier’s work. In The Book of Abremelin the Mage he’s got the power to summon banquets and food generally…it sounds like he’d be a great choice to run a sleazy hotel in Vegas.

Interesting note: Asmodeus is sometimes described as a cambion, half-demon, half-human. His mother in some stories is Lilith, and his father Adam…although that would, in a sense, make him entirely human.