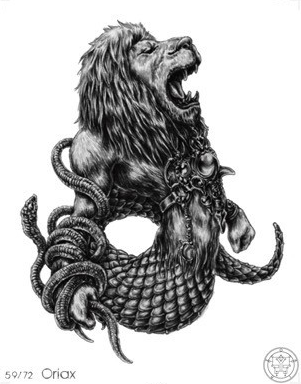 Astronomy and astrology, shape-changing others 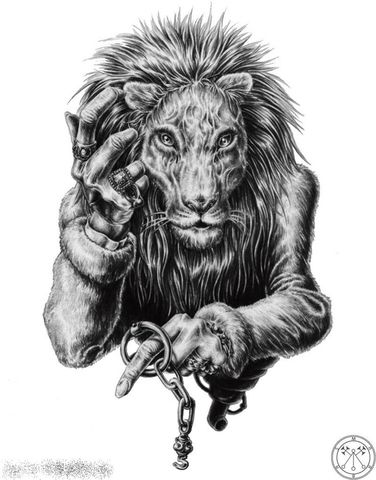 In the form of a lion, riding on a horse, with a serpent’s tail, holding two more serpents. There is some ambiguity here (is he a man-lion on a horse, or just a lion on a horse? Does the horse have snake tails?) But we can assume a mannish lion with snakey elements riding a horse. He can also appear as an incubus or succubus.

Among his other abilities, mostly related to casting horoscopes, he’s able to transform men into other shapes.

There are strong parallels with Marbas, an engineer and a shape-changer.

Ornius “the half-eater” has a pivotal place in demonology: He was the first demon bound by Solomon, who caught him eating half of one of his employee’s meals every day. Through Ornius, Solomon gained access to the names of the rest of demonkind.

Ornius is also a succubus/incubus demon, though he seems to be primarily an incubus (the male version) as he has a habit of strangling men who lust after noble virgins, and male demons are often invoked to protect women (we are using the word “protect” in a very general sense. here.)

Best use: in a scene where a young female noble character, possibly the protagonist, is about to get into her first relationship, a lion bursts in, turns her would-be lover into a horse, eats half her food, and rides away on him. And then comes back in her dreams to try to seduce her for the next three or four chapters. Better yet, don’t use any of that.

In the Encyclopedia of Demons & Demonology (Rosemary Guiley) the author describes him as “an annoying, vampirizing demon,” and adds that when he took someone’s lunch, he also sucked their soul out through their thumb. So that’s a little more extreme than stealing a sandwich. This version of Ornias confesses to Solomon that he transforms himself into a man who craves the bodies of effeminate boys, and causes them pain when he touches them…also, he strangles men who love women born under the sign of VirgoThe language here suggests that he has these pederastic tendencies specifically when he takes the shape of a man. Whether that’s an editorial choice not to open up the door of boy/lion love, or a suggestion that the demon’s human shape has its own dries and emotions, unknown.