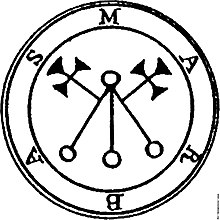 Marbas appears as a great lion, though he can change into a man.

Marbas is one of those goetic “stub entries,” just a list of powers and a vague shape. His field of expertise (mechanical arts, handicrafts) is interesting as an “engineering” demon isn’t very common, and Marbas might have had a field day in the crafts revival of the 6os-70s (or on Instagram today…has anyone sold their soul for Instagram DIY fame?)

Question for the grimoires: “he changes men into other shapes.” Is that specifically men, or humans generally? Answer unclear.

The idea of someone who is into engineering, hard science, and construction AND can change people into different forms lends itself to a sort of crazed mad science scenario where involuntary volunteers and damned souls can become literal guinea pigs or enslaved animals laboring under a lion-king. Holding onto that thought. His grimoire notes suggests that he can change people into other shapes, and one might assume that means “change men into animals,” but Marbas has a background in mechanical engineering, so he might transform people into steampunk mechanicals, streamlined chrome synthetics, architecture, clunky rusted monstrosities…he takes the form of a “great lion” and if he prefers that form, he may use his transformation power to create “hands” for himself out of damned souls or unlucky mortals.