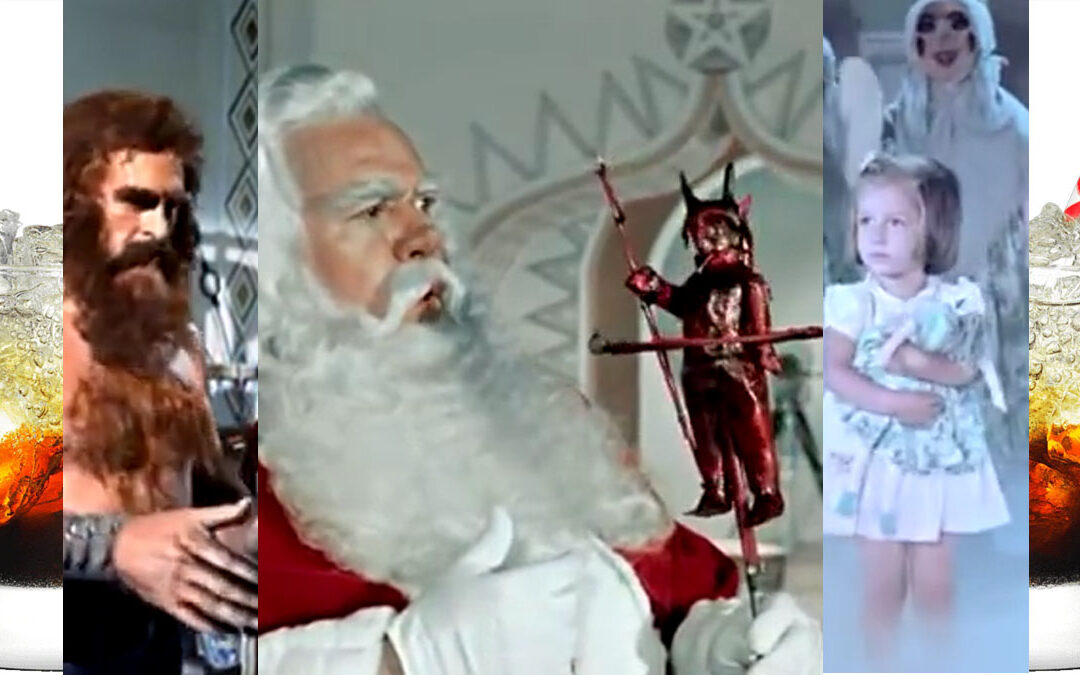 Well, maybe Episode 6 is too early in the series to wallow in complete self-indulgence? We don’t know…obviously. Because tonight we’re going to tackle Santa Vs. Satan, which was something of a Christmas classic in 1959, and is, today, solidly in the canon of good-bad Christmas films. Jacob thinks its “much more watchable than Santa Claus Vs. the Martians,” and that this isn’t really saying much. Two out of three hosts enjoyed this movie.

On the subject of “movies you may not enjoy,” Dante fans may want to either pursue or avoid the 2018 “Dante’s Hell Animated” (Part 1, Part 2), and the Dante documentary that’s by the same creator (trailer). Either is an appropriate response. Both are by Boris Acosta. Going down the rabbit hole on these two films is…quite weird. There’s a lot of glowing reviews of the two, and honestly, watching these films and then reading the comments feels like experiencing a form of insanity, because it’s obvious the films are, well, not good, but the reviews are just stellar. Imagine a crowd of hundreds, including a few gourmet chefs, raving about Jack in the Box tacos. It’s like that. Is it me? Please tell me it isn’t me. All of this is in some weird orbit around the Dante cryptocurrency slowly slipping down a gravity well of self-hype. Maybe this is the Dante’s Inferno version of “Foodfight!“?

You really shouldn’t face “Santa Vs. Satan” sober. Victoria recommends you try a mind eraser, perhaps one before and after the film. A mind eraser is a 1980s fizzy cocktail that’s a layer each of coffee liquor, vodka, and soda water. With thanks to Kahluah for the illustration at left and this recipe.

And for the kids, who shouldn’t have to suffer just because they’re too young to have their minds erased, Victoria recommends the “It’s a Schnapps World (after all) advent calendar…but I suspect she made it up. -Jacob

Jacob is occasionally interested in science-cooking and molecular gastronomy, and if that’s your algeinate-encapsulated globe of kiwi juice, Herve This’s tome, Molecular Gastronomy: Exploring the Science of Flavor is a nice primer on the subject. Hervé Villechaize is someone else entirely. Surprisingly (although given that there’s an infinite number of monkeys typing on the internet, maybe not surprisingly) Bon Appetite posted a recipe for pickled french fries. We didn’t try this one though, our experience of pickled french fries is purely fictional.

There are a few versions of Santa Claus (1959) online. We recommend this one, for as long as it’s available, it’s got bright color and not too many advertisements. But you might enjoy the Rifftracks treatment of the film, which is a lot more fun to watch. “Santa Claus” is actually watchable, but if you want to look into the extended cinematic universe, their version of the other three shorts, in “Santa’s Village of Madness,” is MUCH more survivable…the original is just an incoherant mess of bad fursuits and freeform rambling. Accept no substitutes.

Also, keep a copy of TVTropes’ breakdown of the film open as a companion piece, it actually kind of helps.

Re: The extended mythology of the Gordon Murray Santa Claus film: The bulk of the movie was pulled from the 1959 Mexican film, Santa Claus. But not all of the film was used; some portions were repurposed or recycled in a series of shorts used to promote Murray’s line of Christmas theme parks. They’re pretty horrible all around.  They’re loud, incoherent, frequently ugly, and just hard to watch, but as far as I know the other films are Santa and his Helpers, Santa’s Enchanted Village, and Santa’s Magic Kingdom. Not sure about Santa’s Fantasy Fair, it sounds like it just adds unrelated short stories to the “Sha Na Na” plot (the three naughty boys side-story.)

A few photos from early in the film: The vista of space, an outside view of one of many of Santa’s workshops and offices; the panopticon organ and some shots from toyland, including weird Festive Side of Sears blender product placement from Germany and the American kids’ costumes.  The introduction to the “hell” sequence and a couple pics from that scene follow (it is, after all, our justification for watching this…) Victoria suggests that Pitch’s moves could easily be compared to the not technically incomparable Billy Squier, particularly in “Rock Me Tonight.” So watch that one if you need a moment of escape from all this. 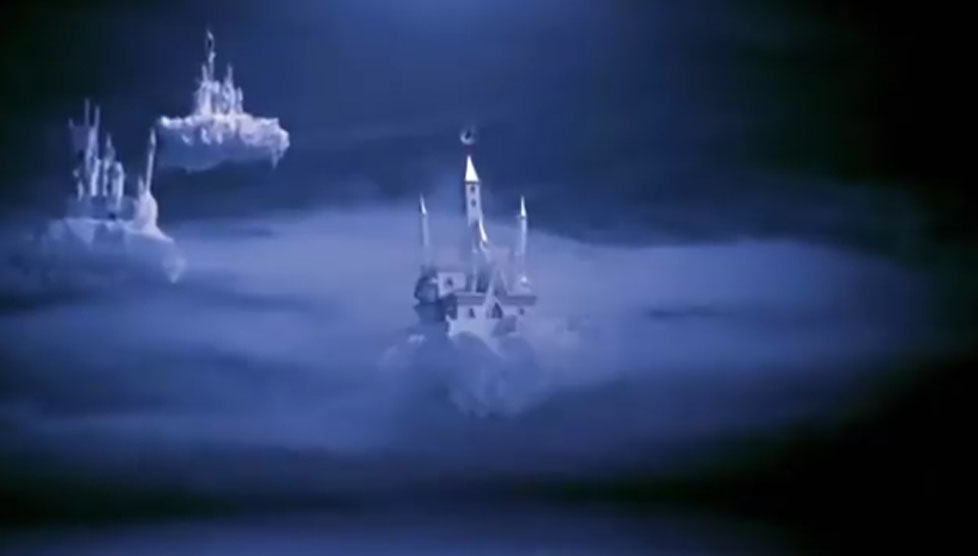 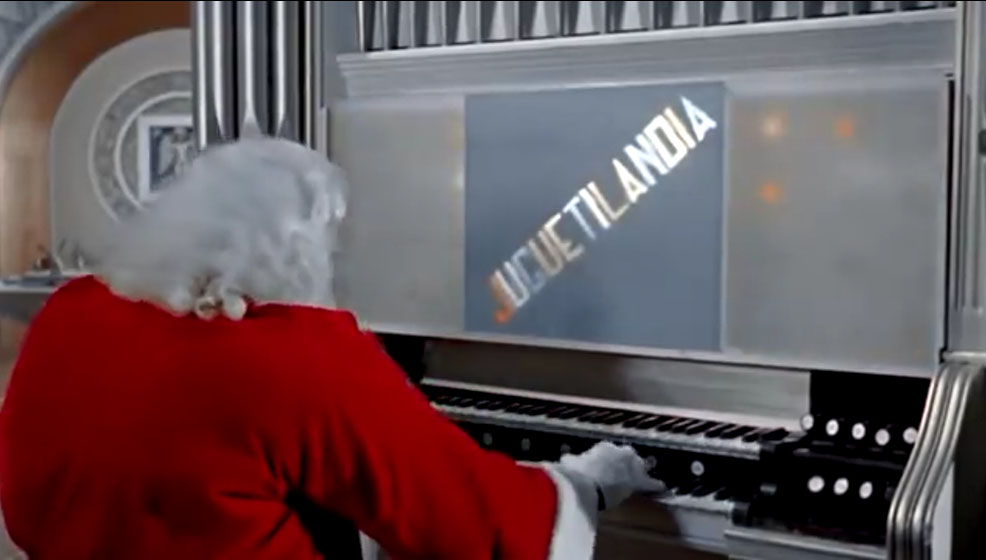 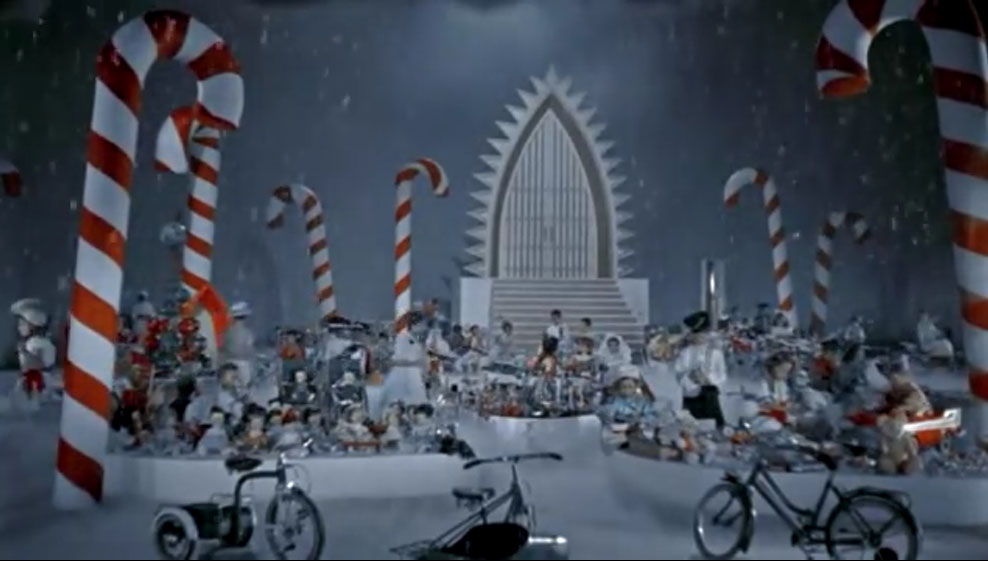 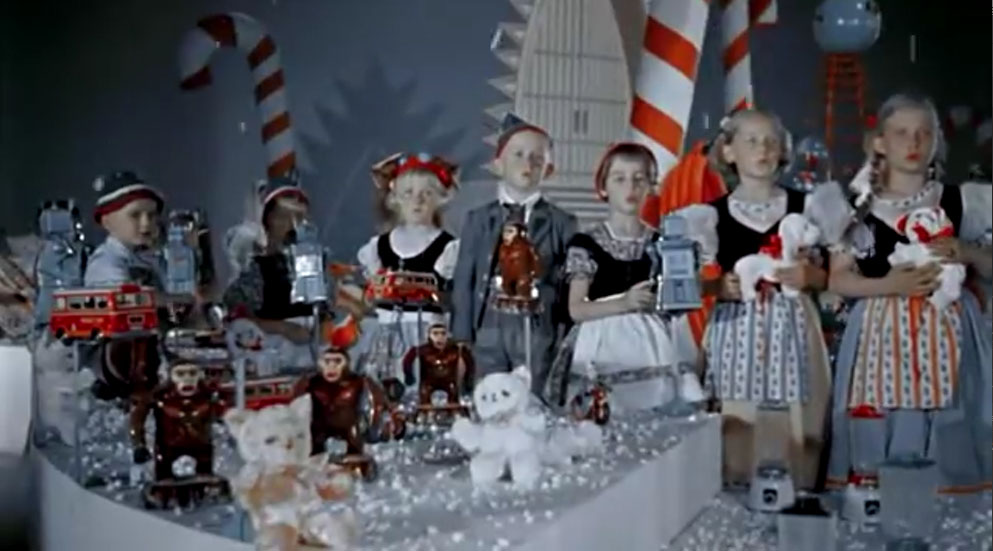 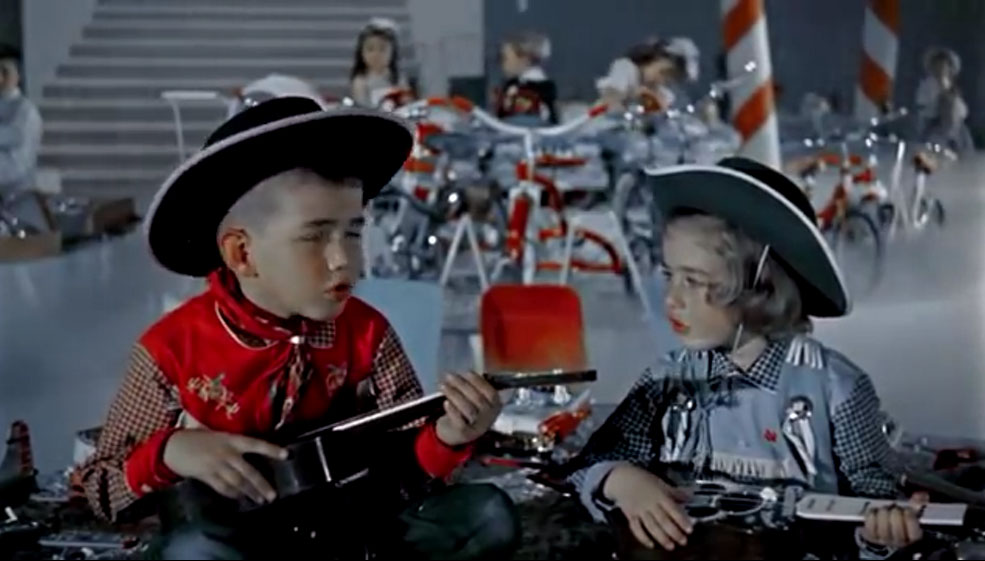 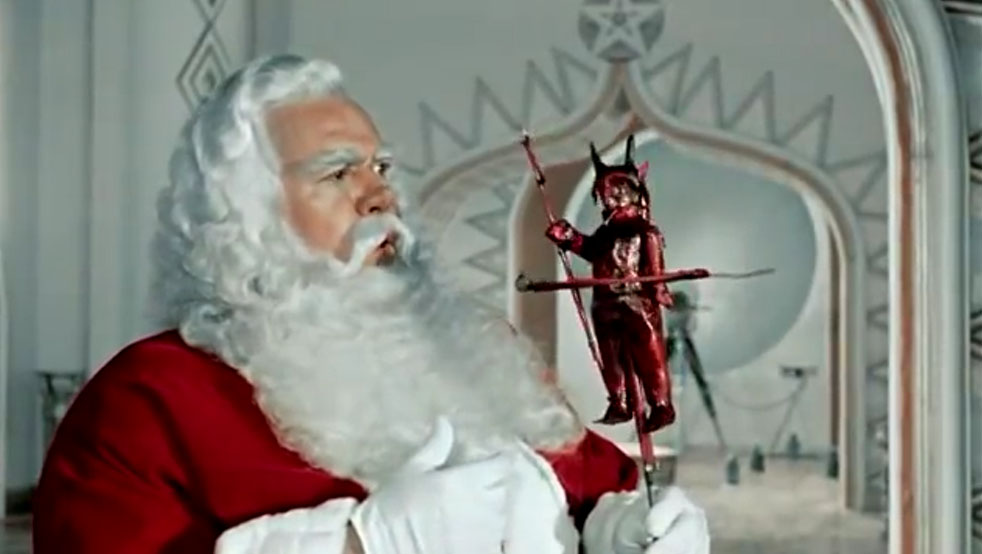 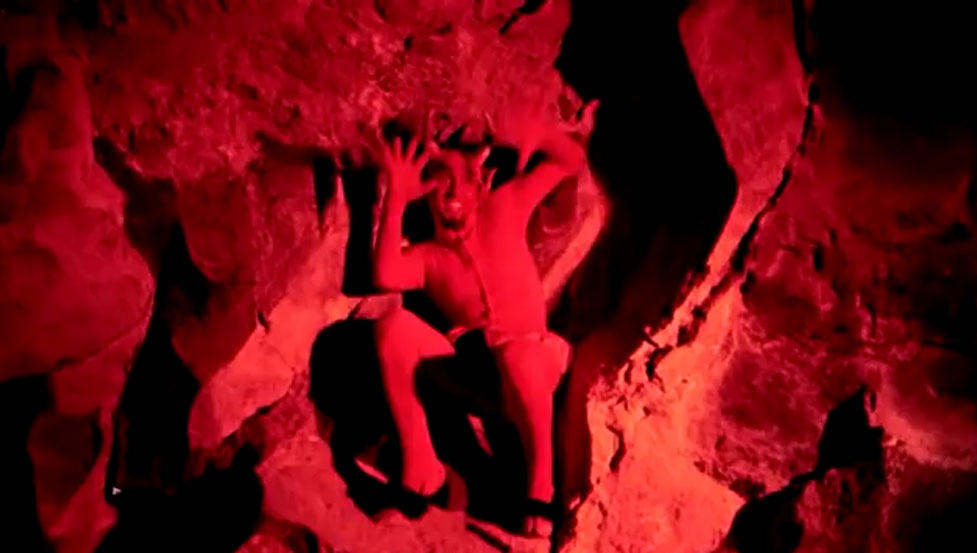 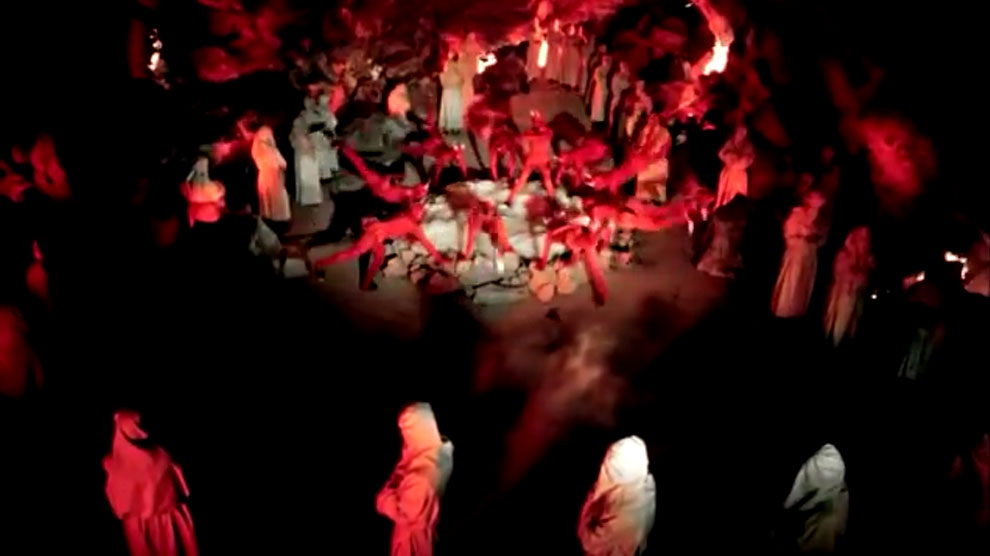 I word-drop “Panopticon” a few times, but maybe not everyone has this in their memory banks? It’s a particularly dystopian prison design system, where a single rotating or open-face guard tower looks over a huge number of prison cells in a massive layered ring, facing inward.

Obviously a related topic, “Mary Had a Little Lamb” has three stanzas, not seven. Arguably its most hellish application was in Thomas Edison’s singing doll product, where a tiny, terribly flawed, recording was placed in a very large dog. It’s eerie. More recently, Florene LaRou and the Fifth Dimension were touring as recently as 2017! We don’t have their original wax cylinder recordings implanted into talking dolls,  but they did have a 50th anniversary concert, with highlights on YouTube.

Your comic book deep dive for the week: a very in-depth study of the symmetry of Rorshach’s origin story in “Watchmen.” I don’t think “Santa Claus” has this level of deepery, but it’s fun to pretend.

Re: Gnosticism and the Demiurge: Wiki’s article on the subject is excellent. Essentially the Demiurge, a word derived from roots of “craftsman,” is the creator of the world, and in charge of maintaining the world itself. Gnosticism holds him as a separate entity from the higher-level, unnknowable God. Because of the Demiurge’s relationship to the corrupt physical world, he’s a lower-level being. Interestingly, the creator of Demiurge (in some myths) is the goddess Sophia, who has female aspects. That’s kind of neat, and might have been a much better basis for society than a patriarchy.

Now a quick pause to look at some of Santa’s weird, organic technology… 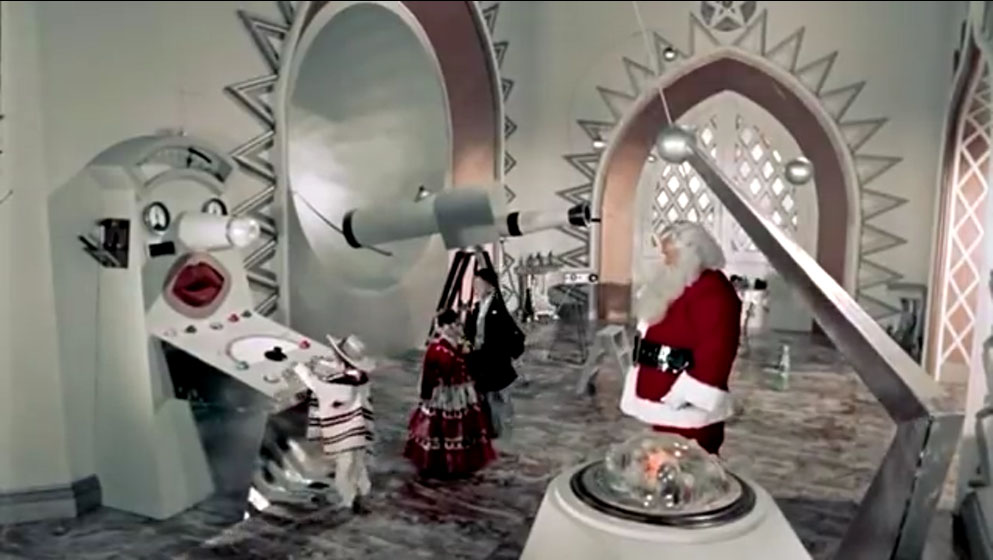 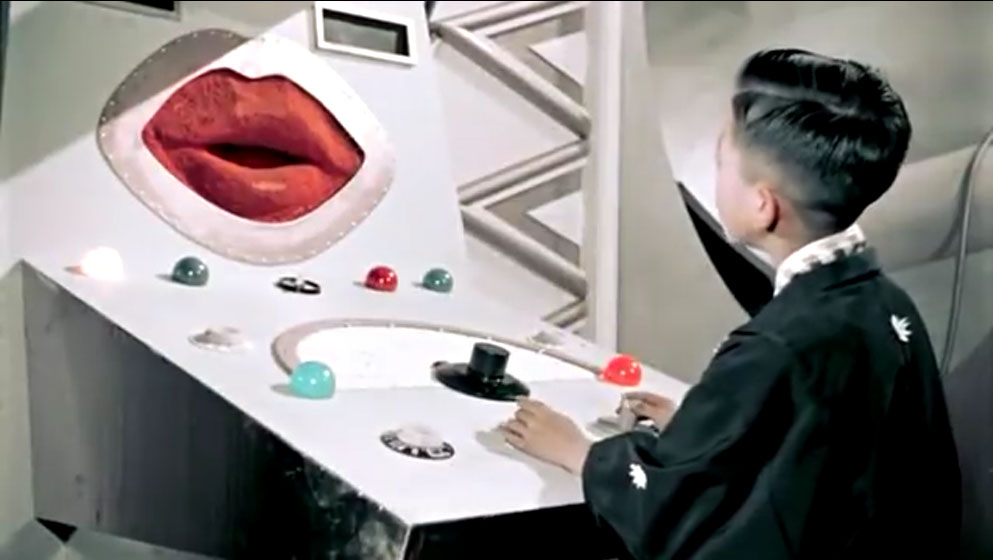 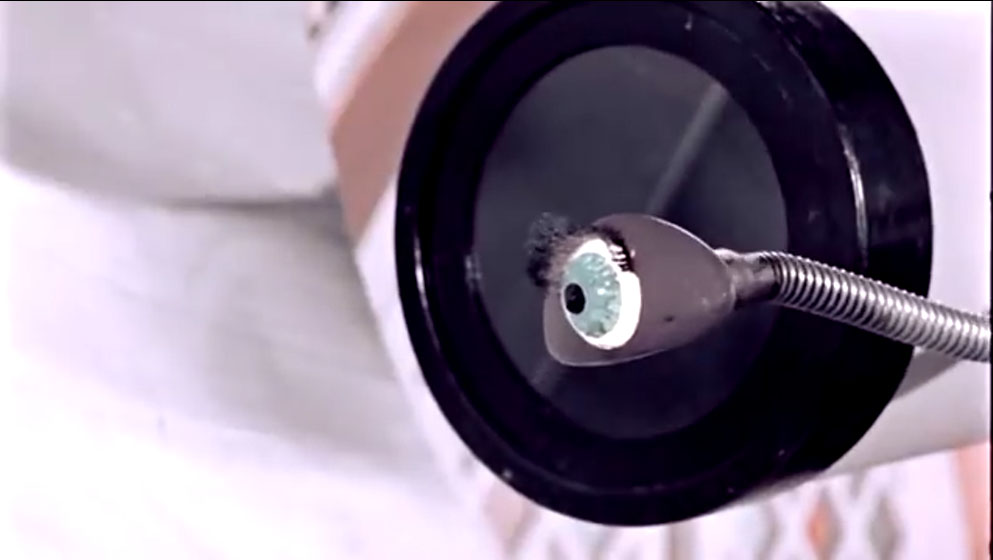 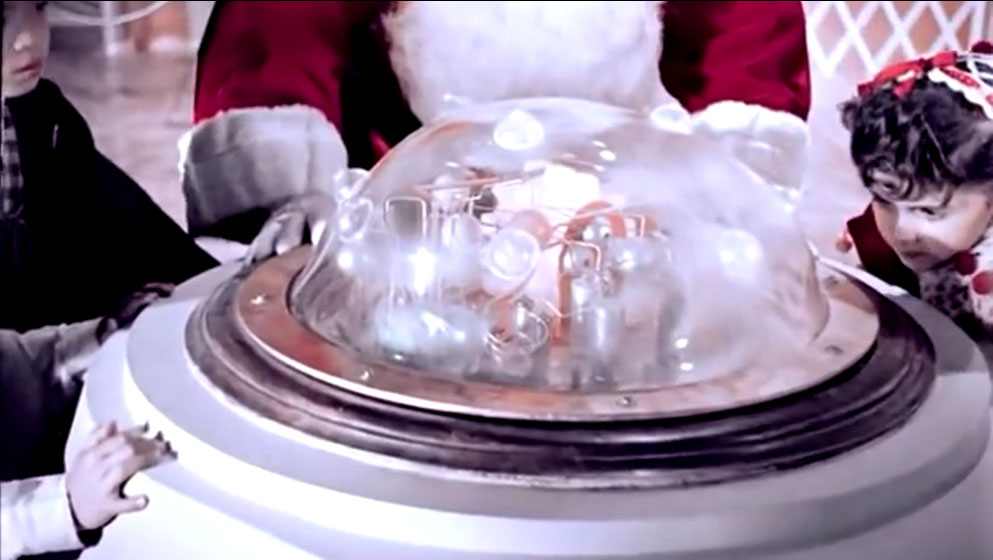 Clearly we’re leaning heavily on photo galleries today…a few key shots here from the lenghty “Preparing for Santa’s Journey” sequences. Billy’s dream sequence is…it is what it is, his dad does have a bit of a “Walt Disney” look though. That may be where all their money comes from. The good folks at Mystery Science Theater 3000 rightly described Lupita’s dream sequence as “nightmare fuel.” The god Vulcan’s chest hair is also kind of frightening. Merlin in this movie serves as “Agent Q” for Santa, and the movie spends a lot of time on a tedious and strange tour of his lab. Finally…more than halfway through the film…Santa takes to the sky.

Jacob missed a Star Trek reference here, confusing the episode “Spock’s Brain” with the very weird flying head parasites from “Operation Annihilate!” Jamin drops a throwback reference to Soup Eater from Santa’s Yule Lads, more about them here or in our Krampus episode. 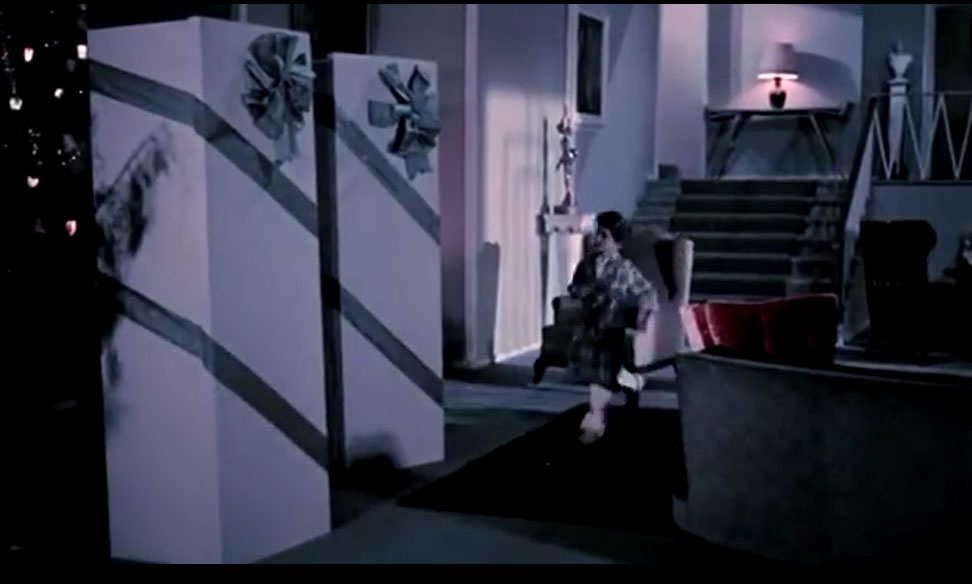 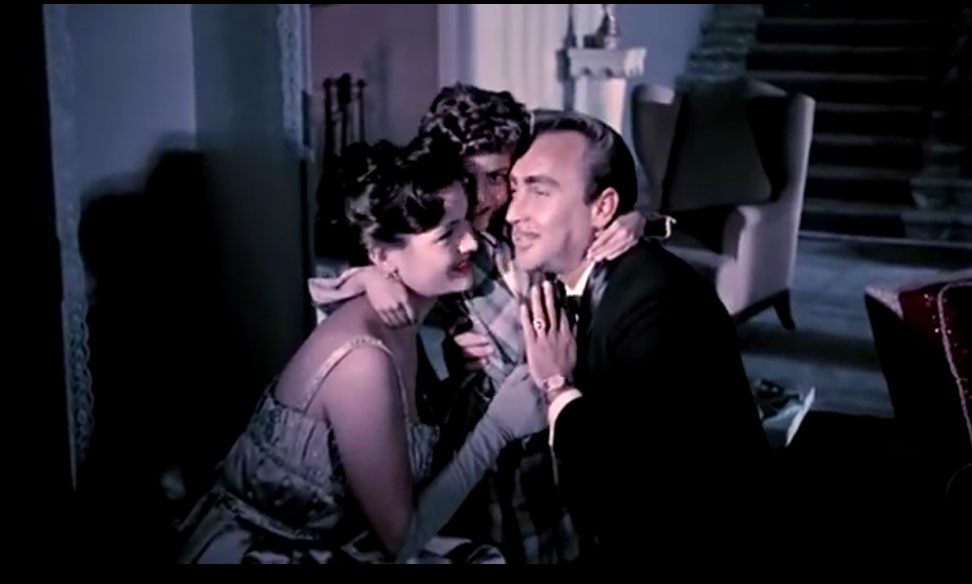 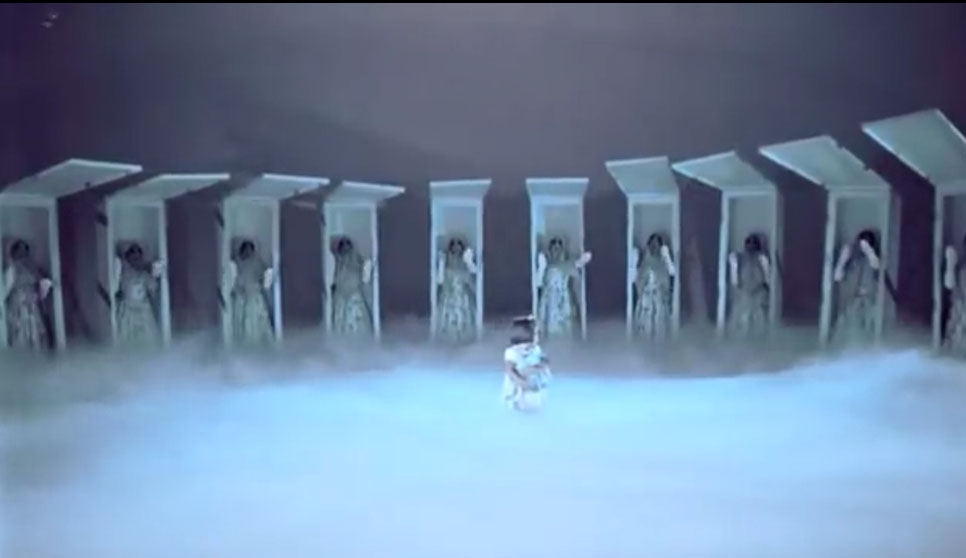 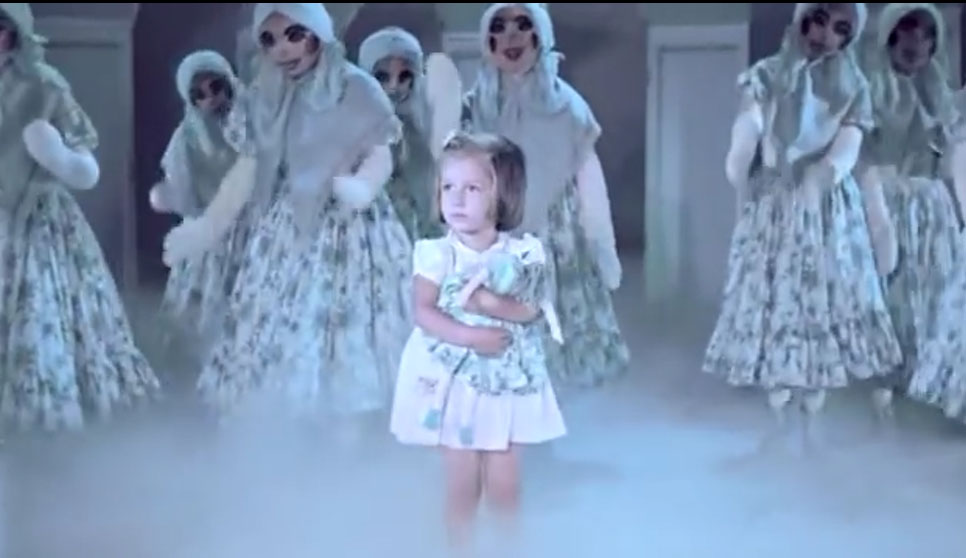 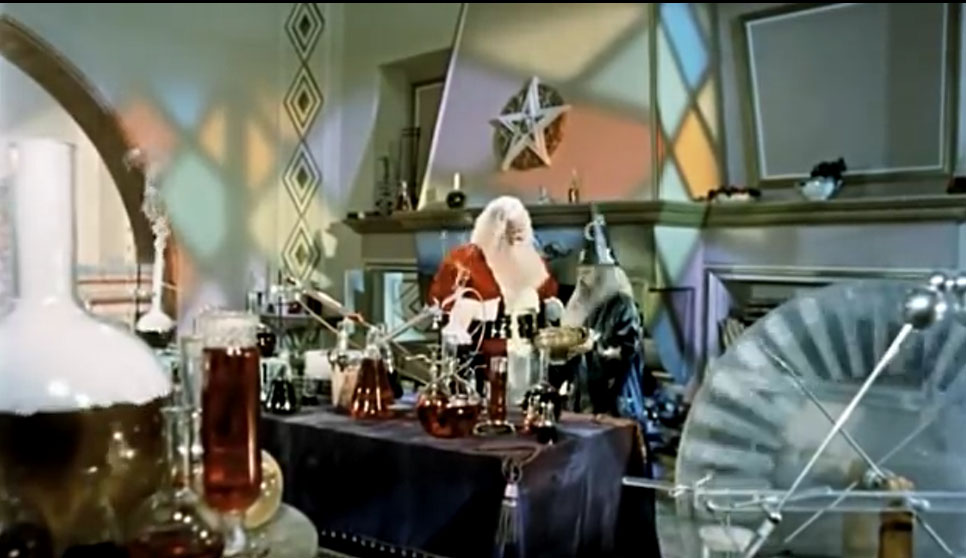 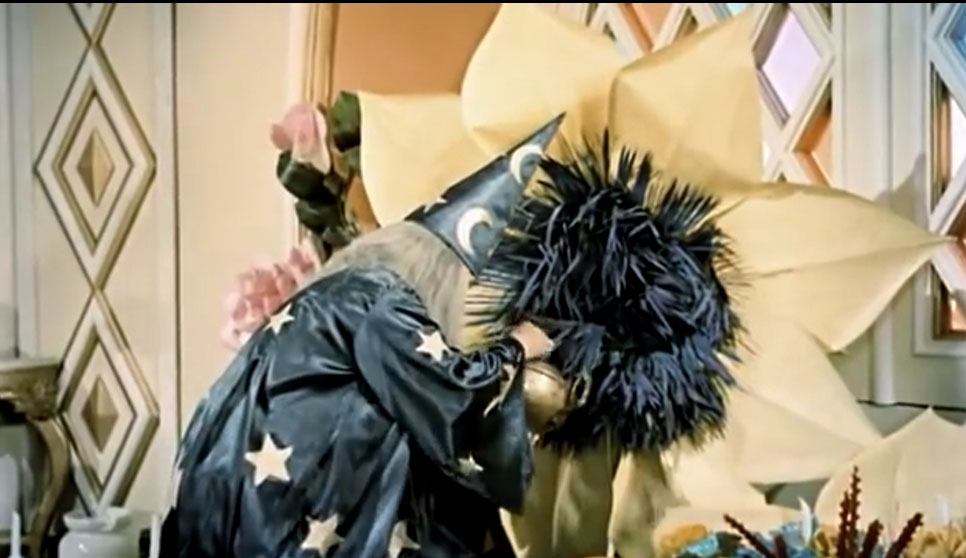 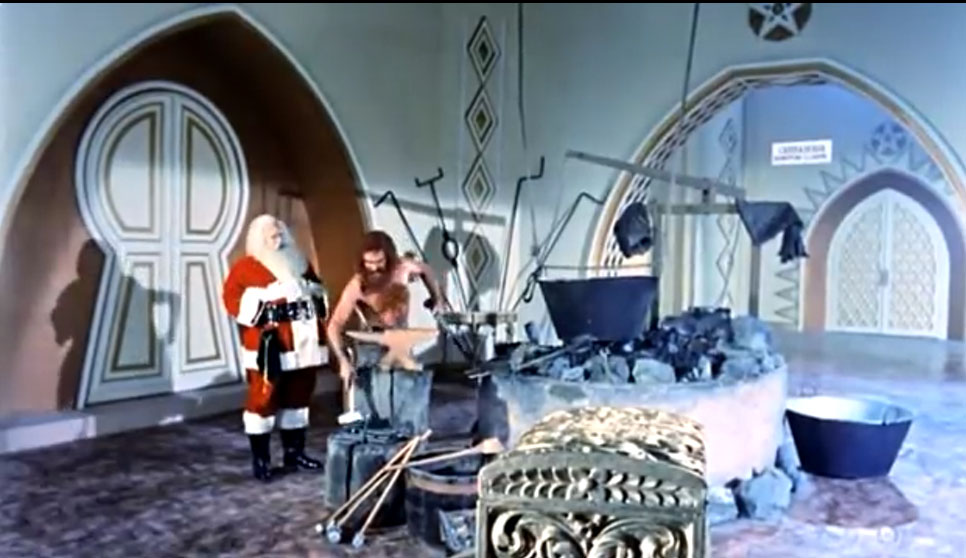 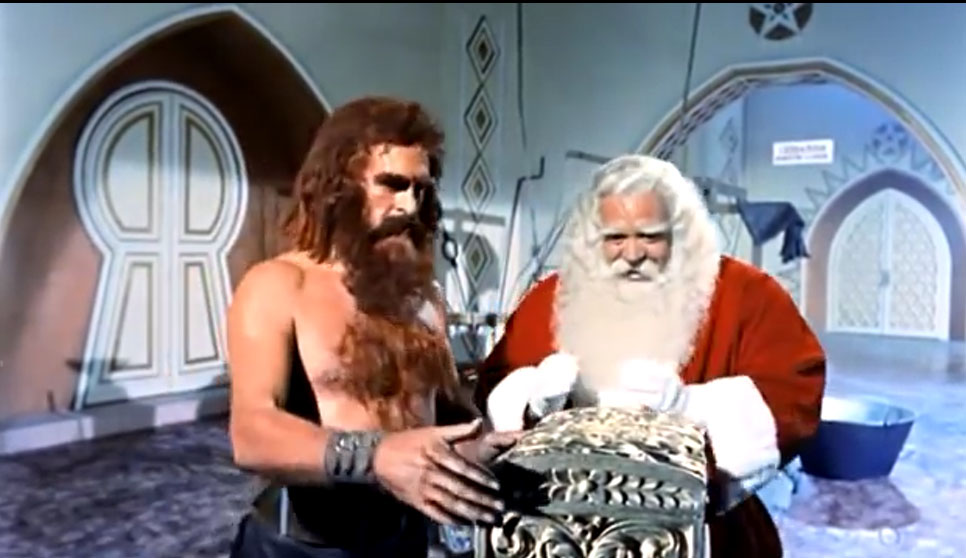 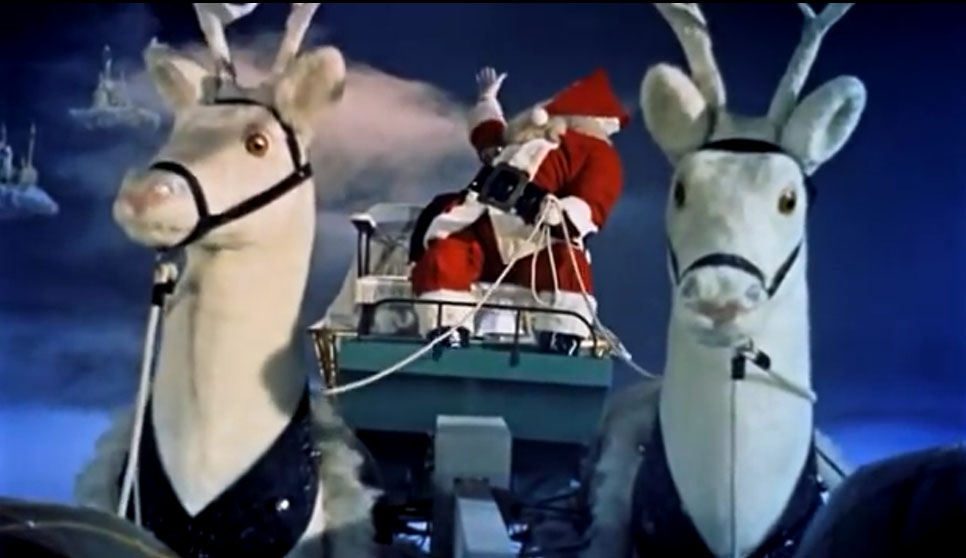 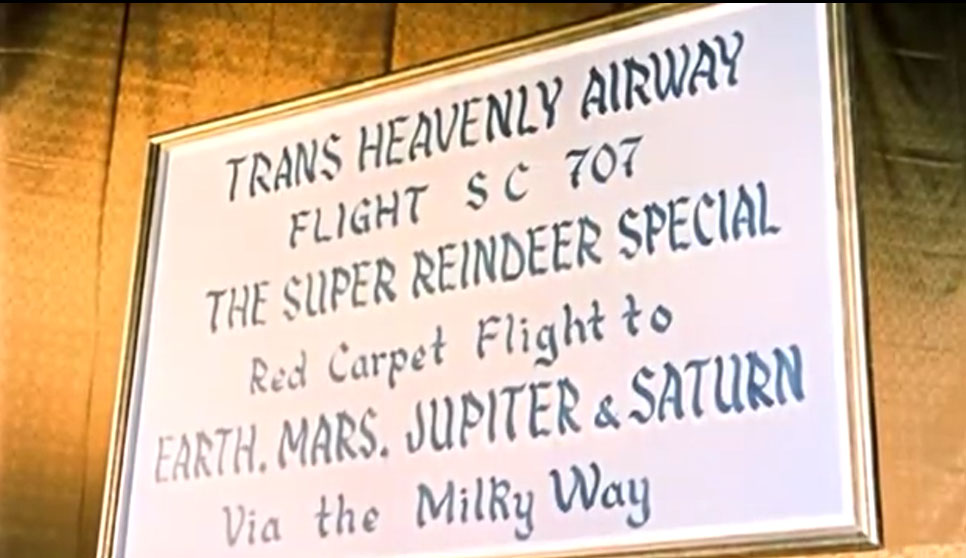 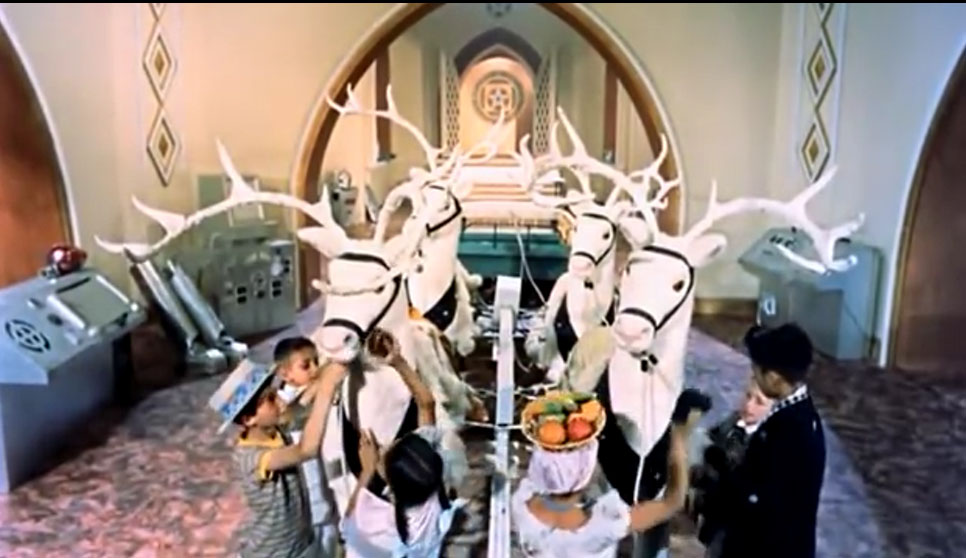 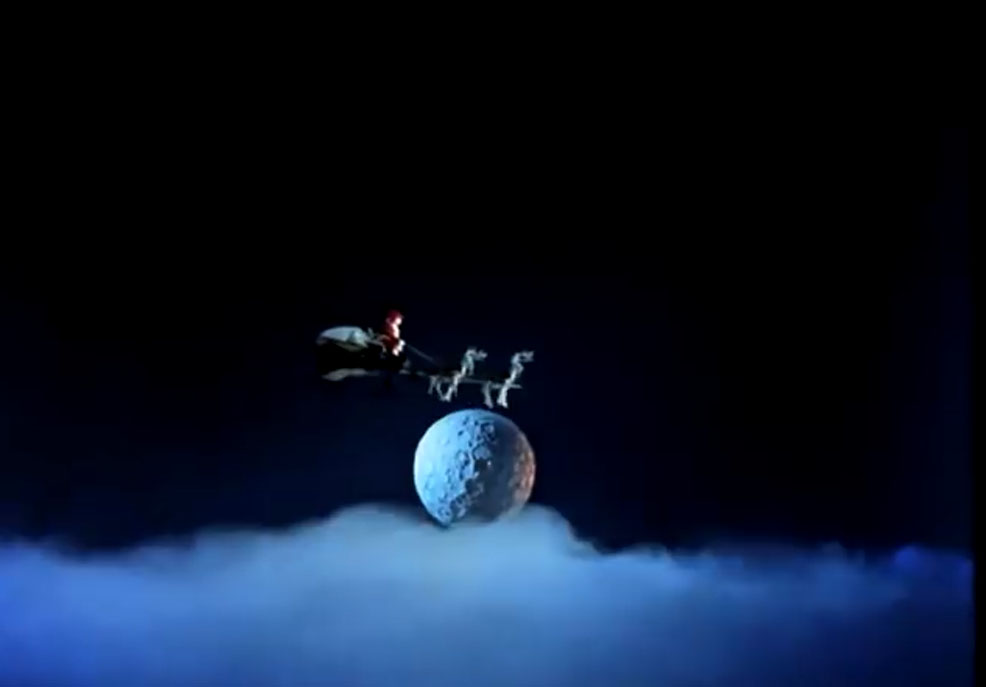 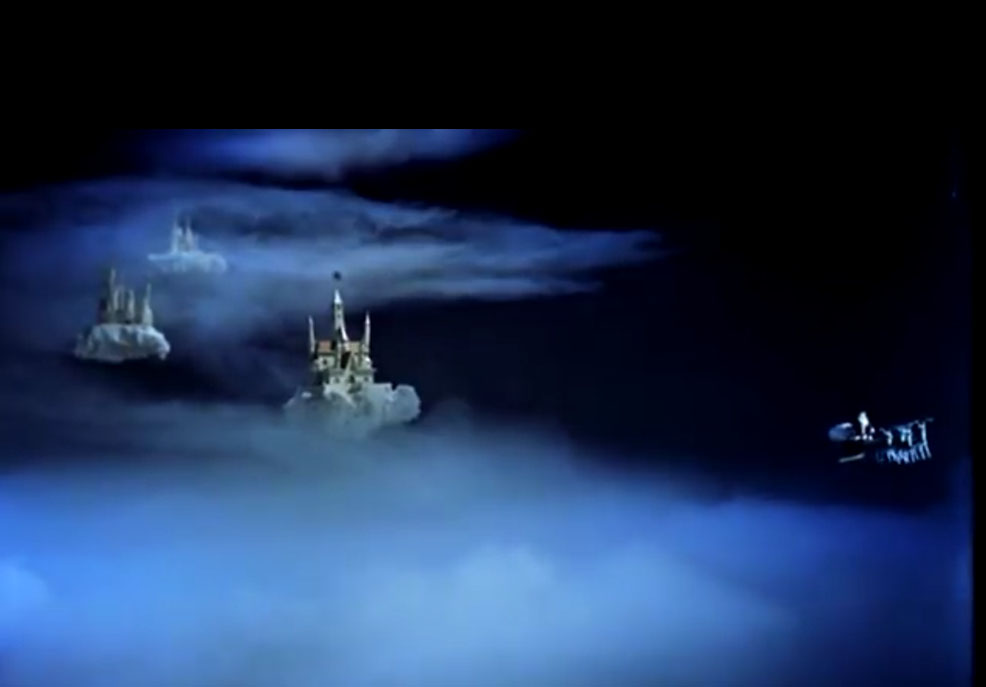 At any rate, the film ends up in a chaotic rush of clashing plotlines, leaving Santa just enough time to place one final present, letting the film play up the “true meaning of Christmas/Gift of Faith” angle that’s kind of a trope in the world of Christmas films.

Is Santa Claus (1959) good? You could make arguments on either side…it’s dated, it’s an artifact of its time, but it was quite well received, getting replays for decades. Jamin says “it doesn’t deserve the Mystery Science Theater treatment,” but MST3K actually doesn’t play the worst films…necessarily. Most of their movies are at least fun to watch, the truly unwatchable films can’t be redeemed with any amount of commentary. Santa Claus stands the test of time…it’s still entertaining, if a bit garbled. If you haven’t seen it, we hope you enjoy the trip. Stay warm and happy holidays! 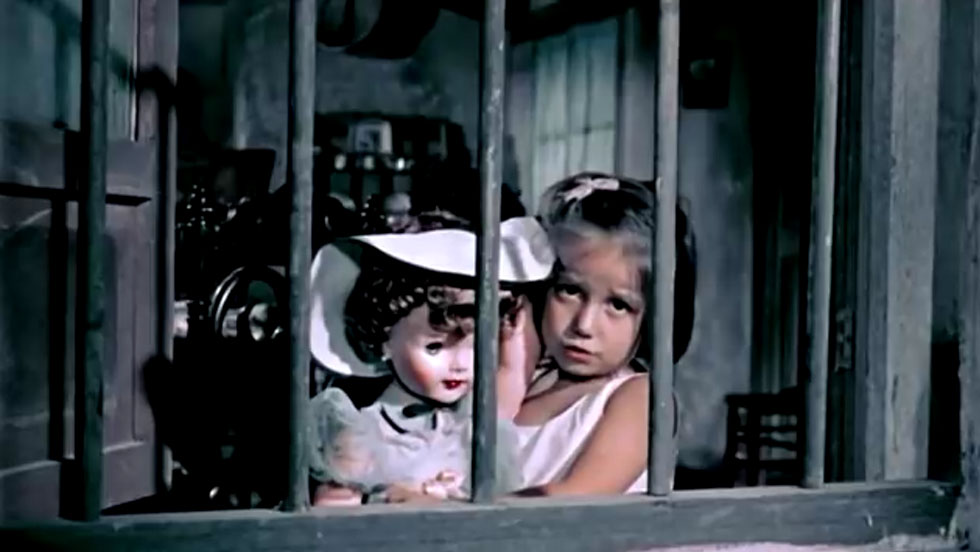 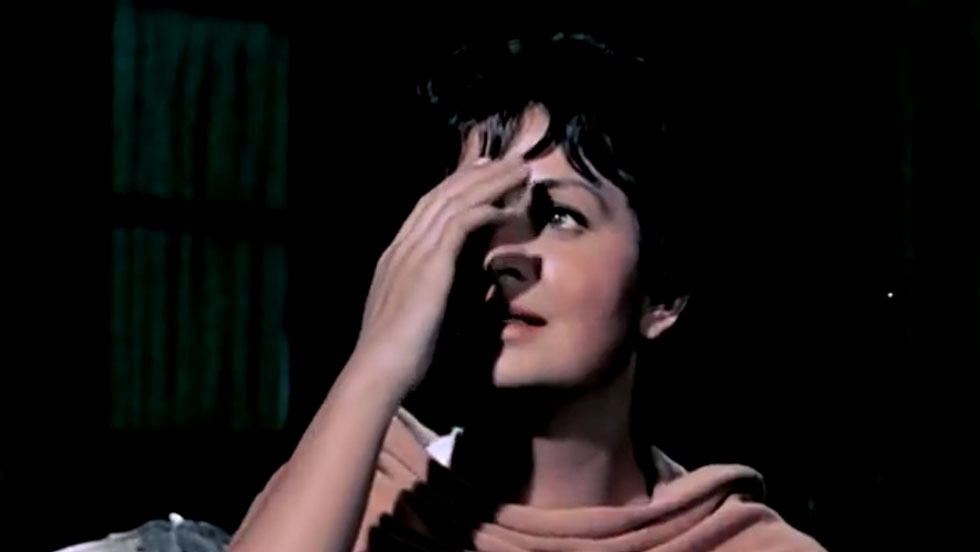 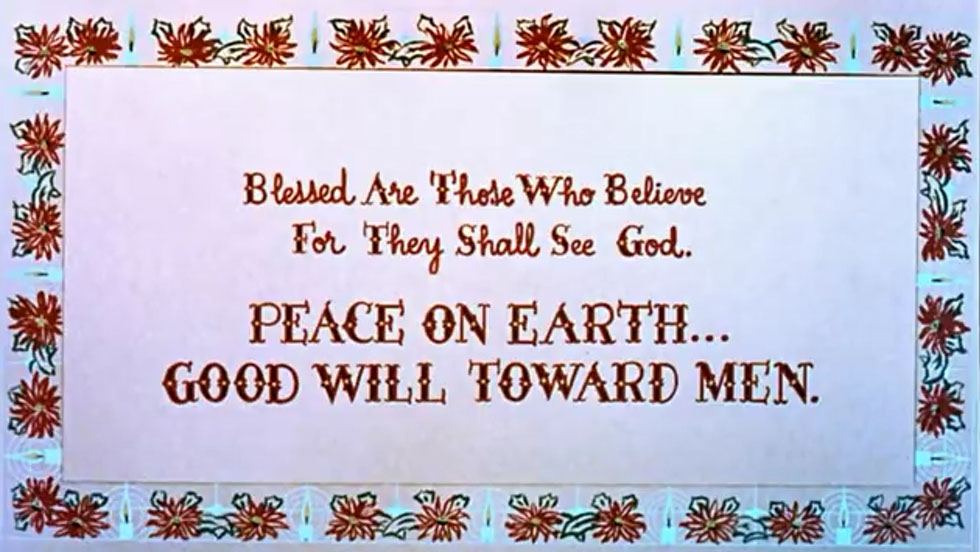