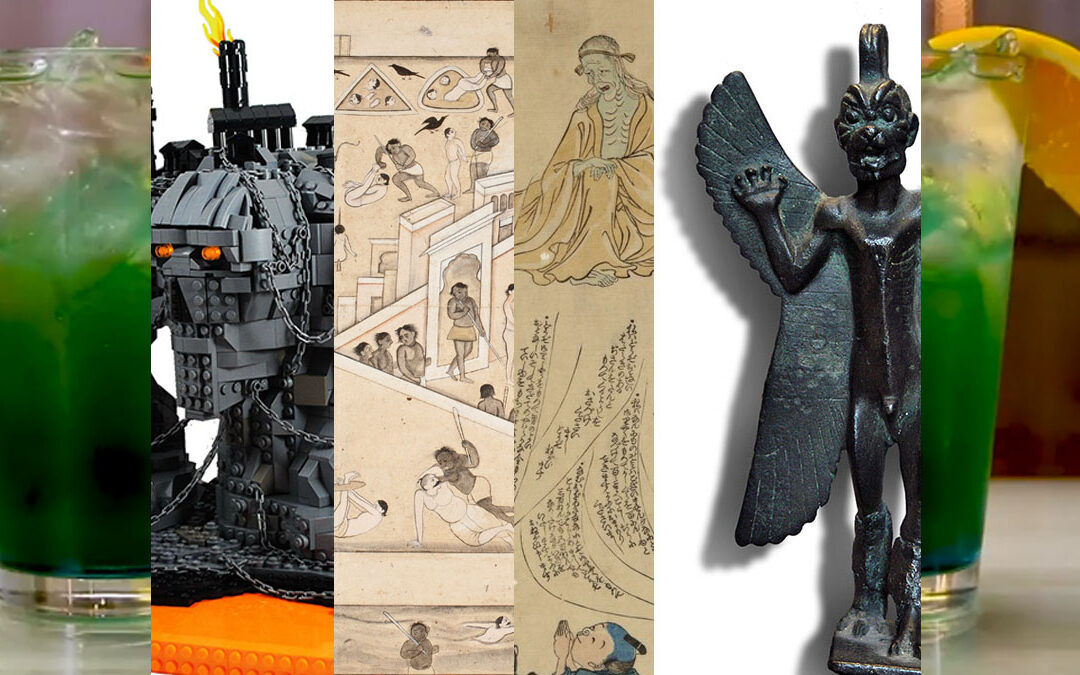 Welcome back to our exploration of the rivers of hell! This is a two-parter, but we recorded it all in one go, so…there’s a few very minor continuity errors. Let’s see if anyone notices…

This delightfully green picture of the “LA Water” drink was lifted from Tipsy Bartender, so do go there and experience the joy.

Balut, you almost certainly didn’t want to know, is a Filipino street food made with a fertilized and incubated duck egg. I suspect it’s in the category of “we’ll call it a delicacy but will serve it to you as a dare” dishes, but I’ve never had one, so I shouldn’t judge. Anyway, all this is to say “don’t google for ostrich balut.” 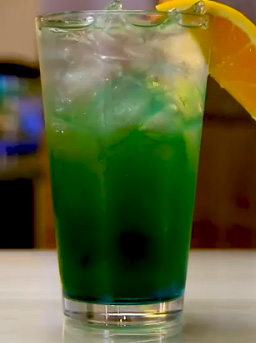 Huge love for the relatively new book Hell and Damnation by Marq De Villers. De Villers normally writes geographic nonfiction along the lines of “exploring African cultures through history” or more recently “searching for the perfect pinot,” not quite travel, not quite academic nonfiction. This book is a near-perfect journey through Hell. It’s broad but not deep, but is probably plenty deep enough for any but the most hardcore fan.  Great read!

Also, Jamin discovers the magical world of Mr. Boston bartender guides, let no one say that this podcast isn’t edumacational.

Hell Tourism should be more of a thing. And for a time it was, I’m sure we’ll do a deeper dive on the concept of Abominable Fancy (the pleasure derived from watching the suffering of the damned) but for now here’s a solid web page loaded with excerpts on the topic.

The Rivers of Hell, made of lego! This is pretty amazing stuff, and certainly the darkest lego artwork I’ve seen to date. A thumbnail of Pyriphlegathon is at left, but check the group’s Flickr gallery for more, this really is a neat project, or this chat on the Eurobricks lego forum of the same. Stylistically, it strongly reminds me of the infernal artwork of Wayne Barlowe. But I don’t want to unpack Barlowe too much right now, I hope we can come back to him later.

Re: The rivers Slith, Gjoll, and Van: I don’t have much on these, what I do have is cobbled together from Wikipedia and this article about Norse astrology. I wish I’d had time to read a bit more on the Slith, which may be the Slid or Slidr, which may or may not have swords turning within its waters…unless that’s a metaphor. Maybe it’s made of knives instead of water?  Oh well, someday we’ll cover Norse Hell and come back to this one. The word “eitr,” the origin of all living things, drips from the Midgard serpent, the source of all life and a terrible poison…huh.

Not an awful lot in English on the Vaitarna River, the river that the souls of the dead cross in Hindu mythology. It’s really interesting though, much more redemptive than your typical hell river. I believe that Johnny Depp’s scene in The Imaginarium of Dr. Parnassus captures some of this. It’s not the scene that I remembered, though here’s a still from that scene. And Wiki has an engaging list of some of the various hells in Naraka, I feel like there’s more than 38 but I may be getting this conflated with another set of hells. – Jacob

So there IS a fan theory that posits that the chocolate river in Willy Wonka is the river Styx, and that the children in “Charlie” connect with the seven deadly sins. But really, you can find anything in Reddit if you look hard enough, it’s magical that way. But let’s talk briefly about Strewwelpeter, a book that inspired “Willy Wonka” in some ways – loaded as it is with obnoxious children getting ironical punishments in rhyming verse. My Strewwelpeter will always be Mrs. Piggle-Wiggle, who was a lot nicer. Strewwelpeter – or “shock-headed Peter” – is full of morbid and ghastly stories, children waste away to stick figures after not eating soup, or get their thumbs cut off after too much thumb-sucking. Delightful stuff. -Jacob

A little aside about Hari-Kuyō, the festival of broken needles. This is a modest little memorial of needles that have died in service to, well, sewing. A little altar gets set up for the needles, and tofu, or possibly yam jelly, is involved. I don’t know where I got the image of floating the little things down a river, though that seems to be one variation of the festival. Anyway, this is a beautiful and gentle festival, I love it. -Jacob 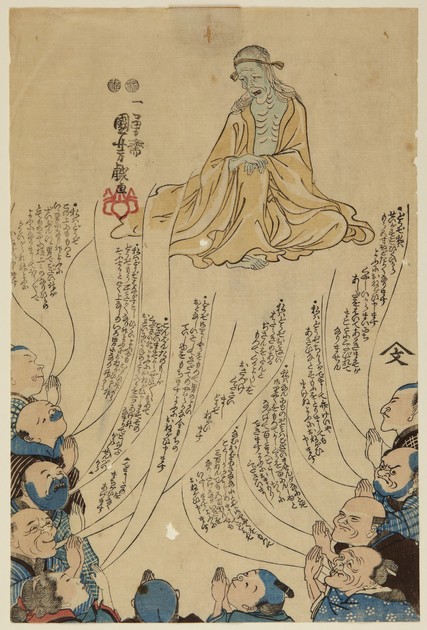 The Sanzu River, or River of Three Crossings, has strong elements of Egyptian style judgment of the dead. Souls have to cross the river Sanzu, and those who rank low on the sinometer may be able to cross on a bridge or by boat. Others have to cross at a narrow ford, or swim across a river filled with snakes and such. And of course the hag of hell, Datsueba (see illustration) will help with the judging by stealing your clothes to weigh them, or possibly by stealing your skin.  More info? This article on the river of the dead pursues a number of related ideas, though it’s a bit all over the place.

Is it significant that the word “Nirvana” means “the far shore?”

Book callout: Flann O’Brien, The Third Policeman, which plays with strange ideas about time, space, and possibly the afterlife. From Amazon’s blurb: “Told by a narrator who has committed a botched robbery and brutal murder, the novel follows him and his adventures in a two-dimensional police station where, through the theories of the scientist/philosopher de Selby, he is introduced to “Atomic Theory” and its relation to bicycles, the existence of eternity (which turns out to be just down the road), and de Selby’s view that the earth is not round but “sausage-shaped.” With the help of his newly found soul named “Joe, ” he grapples with the riddles and contradictions that three eccentric policeman present to him.”

In particular, the book does strongly play with reality, fiction, and the concepts of death and Hell…I suspect we’ll come back to this one.

Maybe someday we’ll come back to the “21 grams” experiment, in which Duncan MacDougall discerned the weight of the soul. But really, the McElroys did a great job on this one over on Sawbones, so maybe just go there instead.

I totally failed to remember “Aoandon,” the Blue Candle ghost story ritual, or spirit., I’m not perfectly sure which. It’s tied to the game of Hyakumonogatari Kaidankai…light a hundred candles, tell a hundred ghost stories, and when the final candle goes out, and the spooky is at its highest, something will get called up! It’s comparable to the “bloody mary” game of chanting the name of a murderous ghost into the mirror until your mind conjures up something from the darkness.

The Huber River…I don’t think we’ve got a lot to say here beyond what’s covered in, say, Wiki. Souls travel across the desert, and the Huber marks the borderland of Kur, the Mesopotamian underworld, which was a dreary place. No judgment, no reward or punishment, just a dusty bleak waste. Sounds fun. The Huber may have been simply “a long way away, over there,” which sometimes happens with otherworlds. The phrase “huber tiamat” turns up once or twice, possibly connecting the river and the primordial chaos goddess. More of that in John Maier’s essay, “Is Tiamat Really Mother Huber?” This essay is also noteworthy for its author’s use of phonetic notation on a typewriter. Aren’t you glad it isn’t 1982? I’m glad it isn’t 1982. 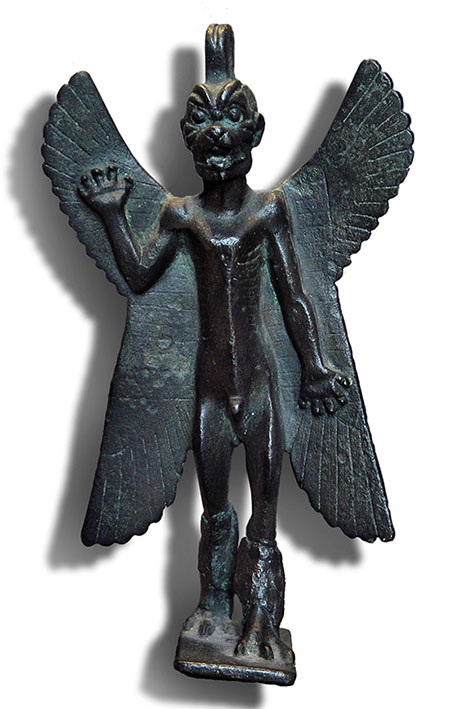 Pazuzu! He has a brief appearance in The Exorcist and is presumably the demon of pea soup. Wiki suggests that he isn’t particularly nice, but he does do a lot of work chasing away other not-nice spirits, so he’s invoked against various evils, despite being a demon of famine and locusts.

He also appears in the D&D universe as the guardian of the top level of the Abyss, the realm of demons; this world is covered in portals to other points of interest in this particular hell, which gives him something of a horrible psychopomp role. From a D&D Demon Lord perspective, he’s kind of a hottie. 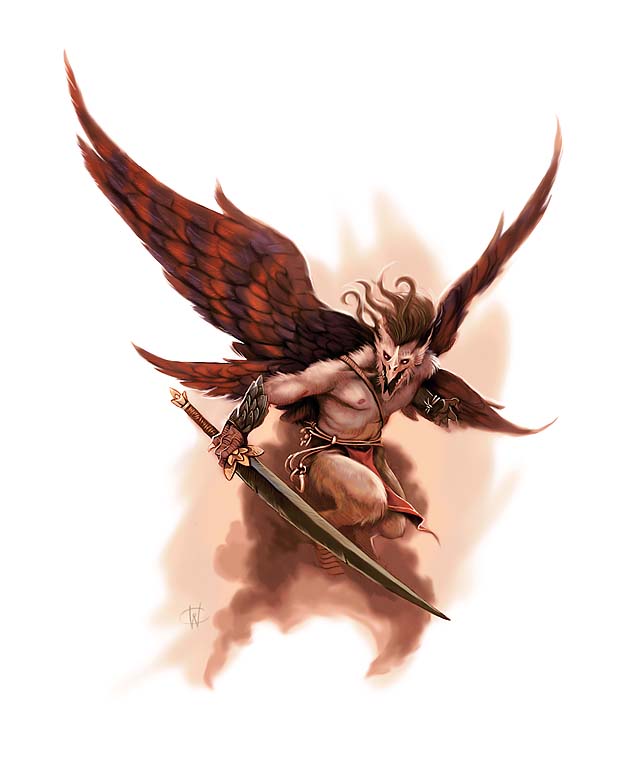 We actually had about 15 minutes of conversation in this episode about the Islamic hell and its rivers. Here’s one article I used about the three rivers, including the Al-Muwbiq, Al-Ghay, and Al-Atham. We went around in circles for most of that time (which is why the end of the episode gets a little rambly). I made an editorial decision that this was too challenging to tackle as a tiny piece of a large episode… we just didn’t have enough foundation yet. But we’ll get there. – Jacob