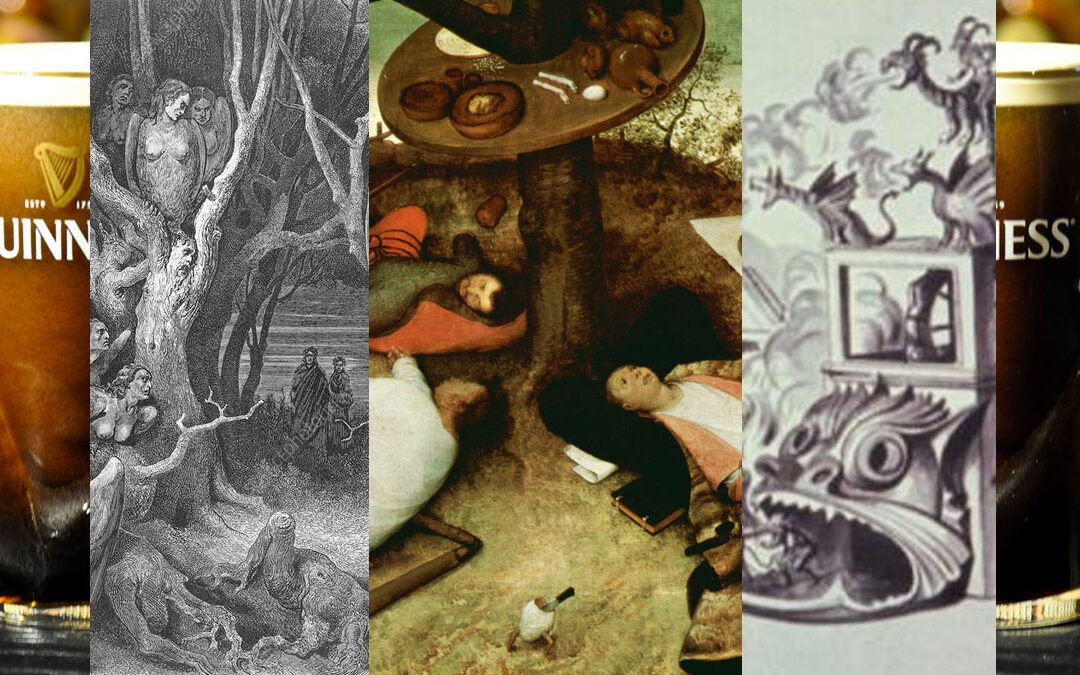 It’s episode one! Why hell? What on earth (or under earth) do the hosts think this is a good topic? I mean, right place, right time, for sure…

Tonight we talk about expectations, preconceptions, take-aways, and run through the briefest possible history of the realms infernal.

Before we really begin, Jacob learns what “plain” is (apparently, beer.) Victoria poem-drops Flann O’Brian’s “A Pint of Plain is your Only Man” (it involves beer). We don’t think that there’s a recipe for Jamin’s absinthe devilled eggs, but there IS a devilled egg cocktail. So that’s a thing.

3:30 – What is hell? There’s a lot of directions you could run with there. We’re focusing primarily on the Judeo-Christian hell because, as Victoria said, “that’s where everyone starts on their hell journey.” I know we’ll move away from that comfortable starting point, but we’ll probably return there, too.  We’re making a lot of sweeping generalities and assumptions, and maybe it’s worth saying here: This is an idea we’re here to play with and explore, not necessarily one that’s a part of our lives.

6:00 – short of digging through all my hell books, I’ll reference Sister Mary Kowalska who has a tight little list of the main torments of hell, leading with “seperation from the divine.” But there’s older versions of this list. -Jacob

13:50 – word-dropped “Cocaigne” there, a proverbial land of milk and honey, a good “otherworld” to start a conversation with. Big rock candy mountain, all the hens lay hard boiled eggs, etc.

18:25 – Sweeping generalities! A nice little tour of the history of the Jewish afterlife at haaretz.com… Sometimes it’s a storage room for hollow ghosts, sometimes it’s where you wait for the great resurrection…

20:00 – The number of the beast is not likely 666, and is quite possibly 616. Also I don’t know if Amaranthe’s Austin “Come and Take It” show was cancelled or no. It’s definitely in the past, either way.

21:00 – Down the rabbit hole, a very brief history of hell. Everything springs out of the Mediterranean, it’s amazing how dense the world of the Old Testament was, really. Egypt, Greece, Rome, Israel occupied the same city. Yes, there’s going to be some cultural blending. Much of this comes from Alice Turner’s excellent History of Hell.

23:45 – Gehenna, the fire that consumes (once, not forever), largely from Keith Wright’s The Hell Jesus Never Intended. Mr. Wright was an Austin author, and I am sad to have discovered this nice little book many years after he died 🙁 A big chunk of this book looks at how eternal punishment wasn’t always a thing, but there’s arguments on either side of that one. I’m definitely oversimplifying! This is the author I’m referencing at 25:55. -Jacob

27:35 – James Mew, Traditional Aspects of Hell, Ancient and Modern (1903) has quite a lot to say about the various hells across the world. It also strongly feels like a book written in pre-WWI Britain, with a strong James Frazery habit of cultural reduction and “everything’s basically Classical Greece” going on. It’s a big book, with a generous dollop of fun and sensational, but it’s hard to miss the author’s cultural lens. Victoria recommends George Saunders’s novel, Lincoln in the Bardo, wherein Honest Abe navigates a ghostly purgatory after the death of his son. I want to pick up Mew’s Drinks of the World too. I wonder if it compares every drink in the world to a John Collins.

31:47 – Cite sources? I don’t think I can, but I’m free-associating from Carus’s History of the Devil and the Idea of Evil and Wiki’s history of religion. The argument here is that religion seems to offer an escape from trembling in caves, but we tend to start by trembling in caves. – Jacob

35:35 – Wiki’s History of the Mystery Play and Morality Play are good places to begin here. Embellished stories from the bible and general Christian legendry that became pop culture. (See also The Golden Legend, a book of saint stories that might as well have been an alternate bible…) 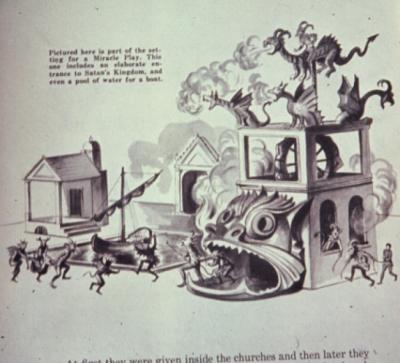 37:35 – I have never been able to keep Robert’s Rules of Order and Hoyle’s Rules of Games straight in my head. – Jacob

37:50 – Purgatory and Dante – Again, painting with a broad brush…Purgatory came to being as a way to get out of the “infinite damnation for finite sins” problem, and probably as a dodge to the question that bedevilled theologians probably as long as there was a concept of hell (“what about the babies? WHAT ABOUT THE BABIES?”) Anyway, in the late medieval (1250ish) a third space opened up in the afterlife to purify, rather than punish. It rapidly became quite a cash cow for the Church (see “plenary indulgence.“), though in fairness there was a lot of legit charitable work funded through this sort of thing. Dante did a lot to define Purgatory, and he was writing very soon after the church legitimized the concept, so really getting in on the ground level there. His biggest addition to the concept was that souls can change, grow, and reform. Hell’s modern evangelical apologists tend to assume there is only heavenly reward and eternal hell, with no third location, and that anything good is burned out of hell’s reprobates (I found Anthony DeStefano’s Hell: A Guide good imagination fodder here)…which is an interesting dodge we should examine later. Can anything good be in Hell? DeStefano’s hell is full of horrible sinners that are the worst aspects of “humanity,” which is, itself, kind of a dodge. Grandma’s not burning in hell because whatever was good about “Grandma” died a long time ago. Hmm. Future episode?

38:06 – For Dante, Limbo is the friendliest level of hell, and it sounds pretty nice and pastoral. It’s where unbaptized but virtuous pagans go, so our favorite classicists don’t have to burn forever. (Infernopedia) It’s worth noting that Dante’s Limbo isn’t littered with babies. 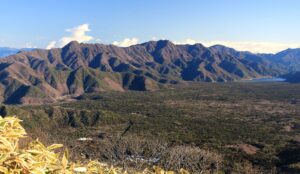 Aokigahara, Japan’s “suicide forest” (with thanks to Alpsdake)

38:52 – Dante’s Forest of Suicides, part of the circle of wrath and violence, is where the souls of suicides are turned into trees and gnawed by harpies. Japan’s Aokigahara forest is a “sea of trees” that seems to draw suicides to itself, at least that’s its legend. 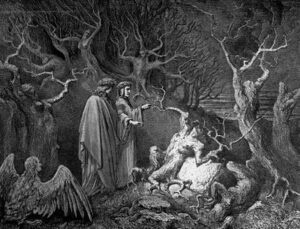 40:00 – I will talk about Tundale’s Vision over and over again, it’s likely the best-known tour of hell besides Dante. It’s a fun one, with a proud, sinful knight as its protagonist, and complicated and prurient torments (lecherous monks are, for instance, eaten by a monster. While inside the monster, they’re impregnated with serpents. They’re “deposited” in a frozen lake, where their serpenty children burrow into and out of them. Also their arms, legs, and privates are turned into serpents, too.) There’s also some good comedy. The Vision of Drythelm is a likely source for Dante, though I don’t remember the fine details of this one as well. – Jacob

Word for the day: Contrapasso, “suffer the opposite.” Punishments in hell should either reflect or contrast with the sin.

44:34 – The kids love Megan Thee Stallion! Jacob and Jamin are not familiar with her, but three days after recording she was the musical guest on Saturday Night Live. Jacob is not-so-secretly a furry and has a minor gripe that Megan is not actually a stallion. Life is full of these disappointments.