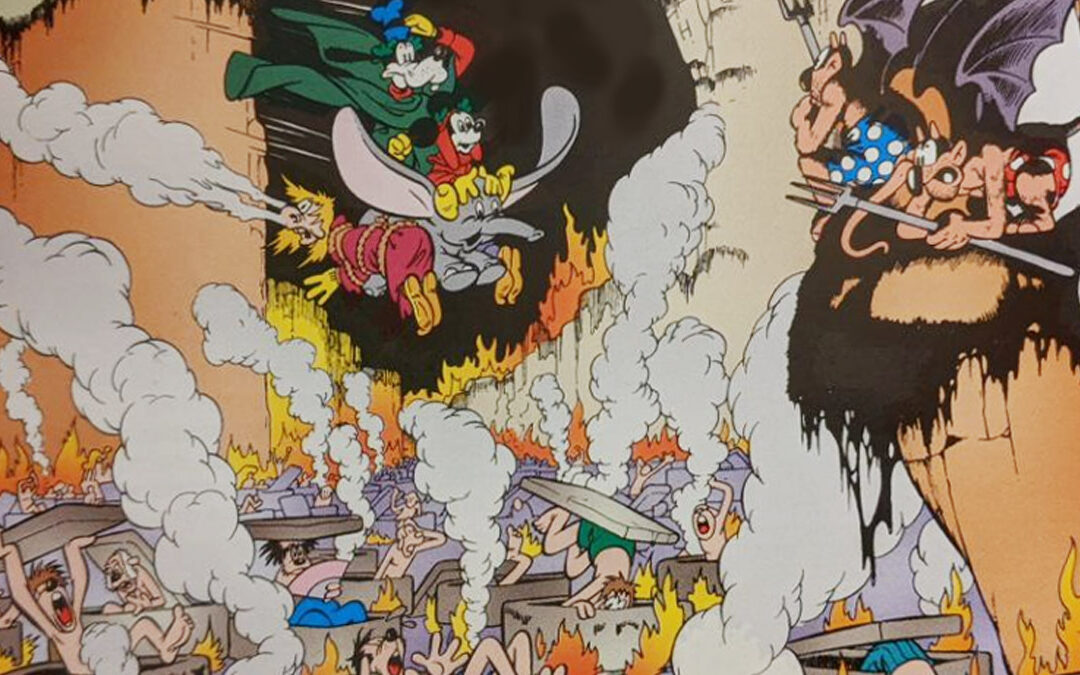 At the mid-point of the path through life, I found myself in a darkening Half Price Books. And this gem, a 1950 Mickey Mouse comic translated and repackaged in 2016 as the graphic novel, Mickey’s Inferno, at the bottom of the discount bin. I feel kind of blessed to have seen it at all, and surprised I hadn’t seen it before.

I’m sure you’ve heard the story before. Mickey and Goofy are performing a charity show of Dante’s Inferno, when the sinister Morty the Mesmerist (AKA Abdul from Bazookistan) casts a spell on these two beloved characters, making them believe they’ve become their costumes, and are actually Dante and Goofy. You’re forgiven for not knowing more about Bazookistan, it really only exists in one 1949 comic panel…and, weirdly, in the musical legacy of the Royal Eurobeat Orchestra of Bazookistan. Insert “The More You Know” sound effect here.

In a way it’s a little bit ironic…is this irony, or just mildly amusing?…that it takes a spell to make Mickey and Goofy believe they’re characters in Dante’s allegorical poem, since Disney characters swap identities and genres at the drop of a hat. But this flimsy little device lets them visit hell in a dream rather than actually going there personally (see also “Pluto’s Judgement Day“, 1935).

Baffled by their strange circumstances, the two seek refuge in the public library. There, like I have several times this, they fall asleep while struggling through a copy of Divine Comedy, and their trance turns into a full-on nightmare.

From there, the comic blends vintage Disney characters, Dante’s imagery, and an art style that’s a little bit classic Mouse House and a little bit Dr. Seuss. The result is mostly comical, but at times darker than Disney tends to be. At least it’s all a dream! 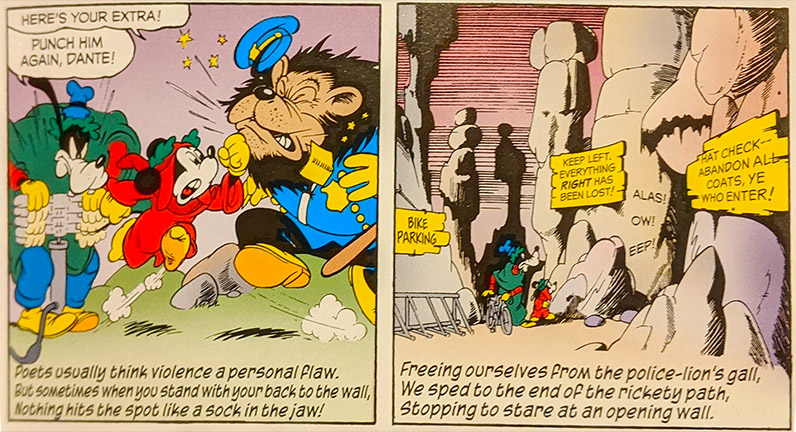 Amazingly, the entire graphic novel is done in jangling terza rima, the “ABA/BCB/CDC/DED/E” of Divine Comedy and many of its translations. I suspect the rhymes are a little easier on the ears in a Romance language. It’s broadly faithful to Dante’s journey, at least structurally. The pair go through nine levels of hell, though in 20 cantos rather than thirty, and we see a number of familiar sights: the forest of suicides, land of burning crypts, Geryon and Pluto (ahem…that Pluto…), harpies and furies and fiends and blue angels. It’s a loving parody, but a strong one. Maybe a little bit heavy-handed with fourth-wall-breaking references. I’m not sure if that’s in the 1950s original or the modern translation. 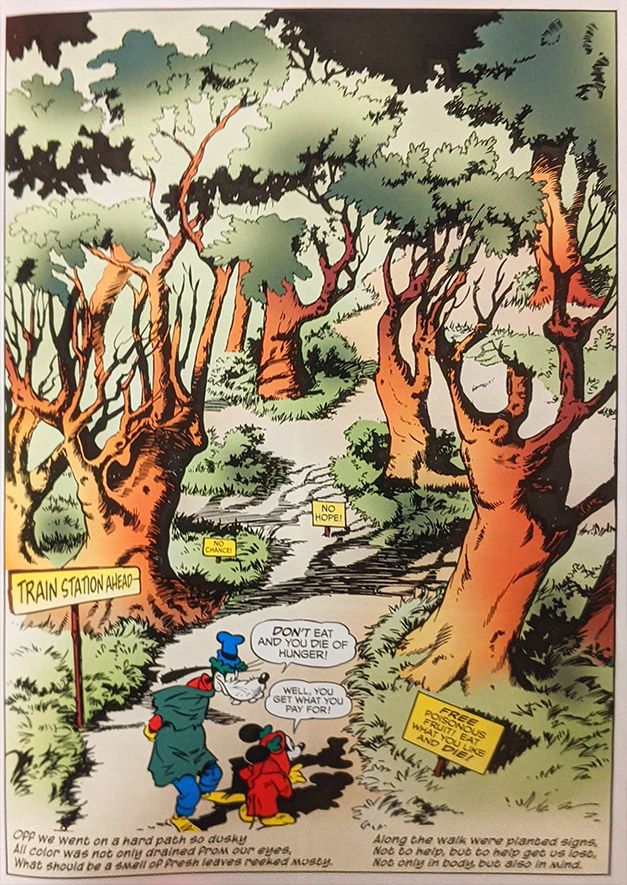 How did such a thing come to pass?

Over in Italy, there was, and possibly always has been, a thread of literary and historical parody versions of classic books and signifcant events, the Le Grandi Parodie series. While mostly unique to the Italian Disney continuity, they are a part of the Duckburg/Mouston (and, dare I hope, St. Canard?) universe. Depending on the literary conceit of that particular story, the parody may be a flashback, previously unknown ancestor, strange coincidence, look-alike, or fiction within a fiction.Italy does love their Alighieri, and Inferno was the first of the Great Parody line, which ran  from issues 7-12 of Topolino (“Mickey” in Italian, now somewhere over issue 3,300!) 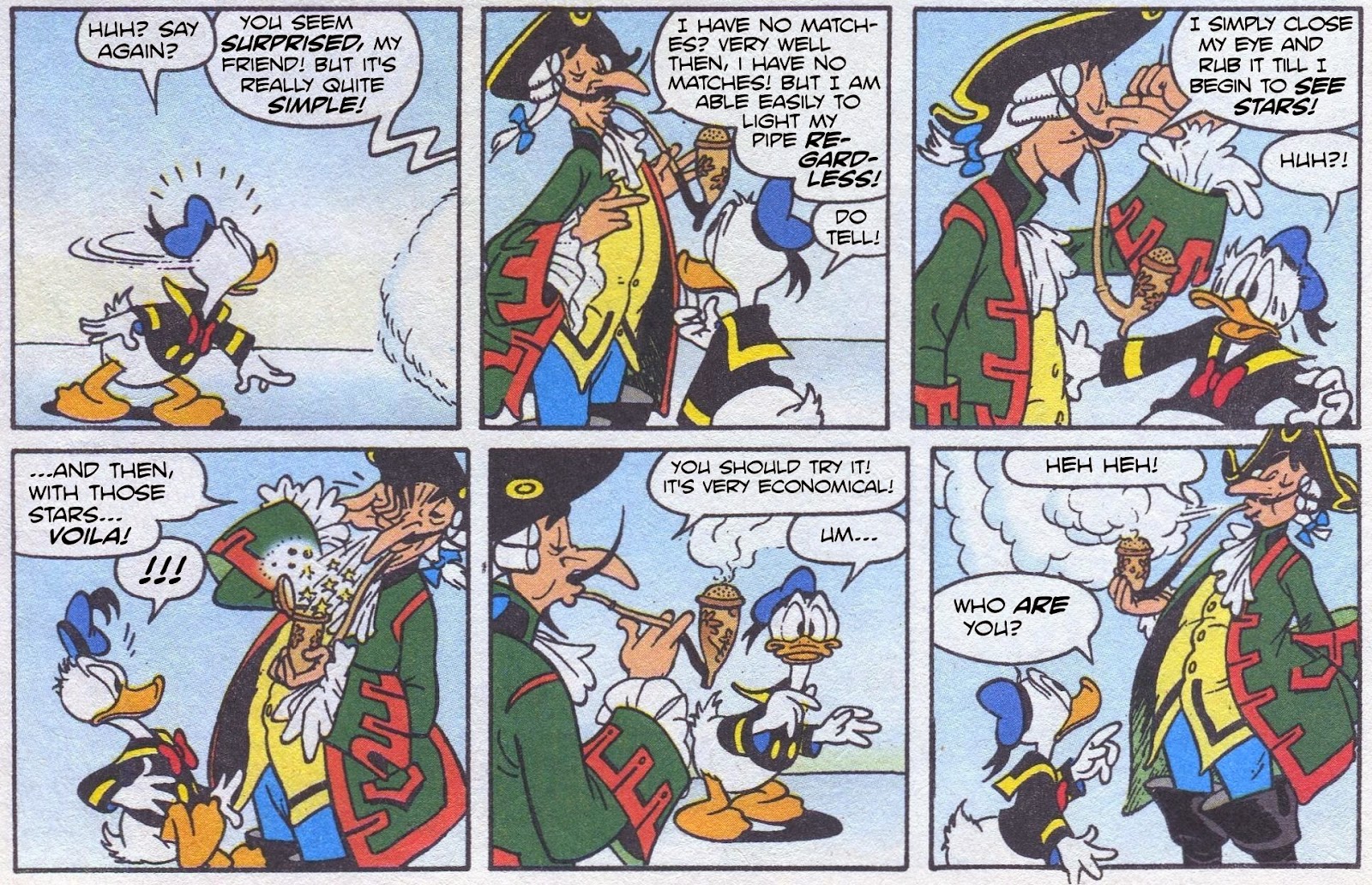 Apparently Donald met Baron Munchausen? They’re really perfect for each other. Thanks to “Duck Comics Revue,” who has a more Disney-informed “Inferno” discussion.

This wasn’t really a part of the American Disney comic series, until 2006, when a shortened version was published in Walt Disney’s Comics and Stories…issue #666. 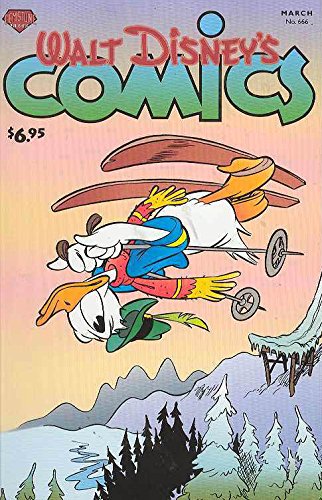 The copy I found at Half Price Books is a fair bit more recent, a 2016 collection of the entire series by Papercutz, a children’s graphic novel company with a good portfolio of vintage and edutainment titles…Including a rerelease of Asterix the Gaul. This release is likely the only graphic novel version of this weird little gem, so go grab a copy! 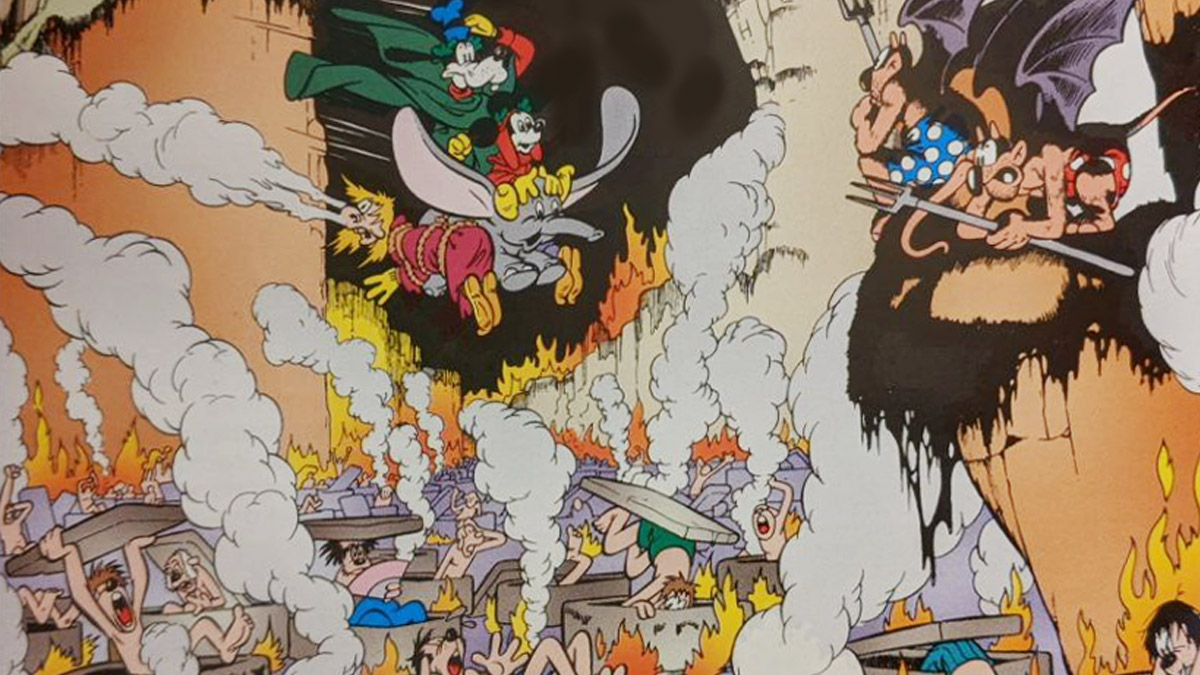 For the most part, it’s as lighthearted a romp through Hell as you can reasonably expect. It’s not an American title, so it’s a bit less sugar-coated than you might have gotten if this had somehow originally been a US imprint. And it is a journey through Hell. So scattered among some cameos that would have been a bit more current in 1950 (Pinnochio, Dumbo, The Three Caballeros, the animal cast of Song of the South, and a strange talking appearance for Snow White’s “Dopey”) there are some moments that are nearly ghoulish.

Take, for instance, the Big Bad Wolf, who is stripped of his flesh by an exploding little pig, and spends several panels in this denuded state before being restored…likely to begin the cycle again. “ 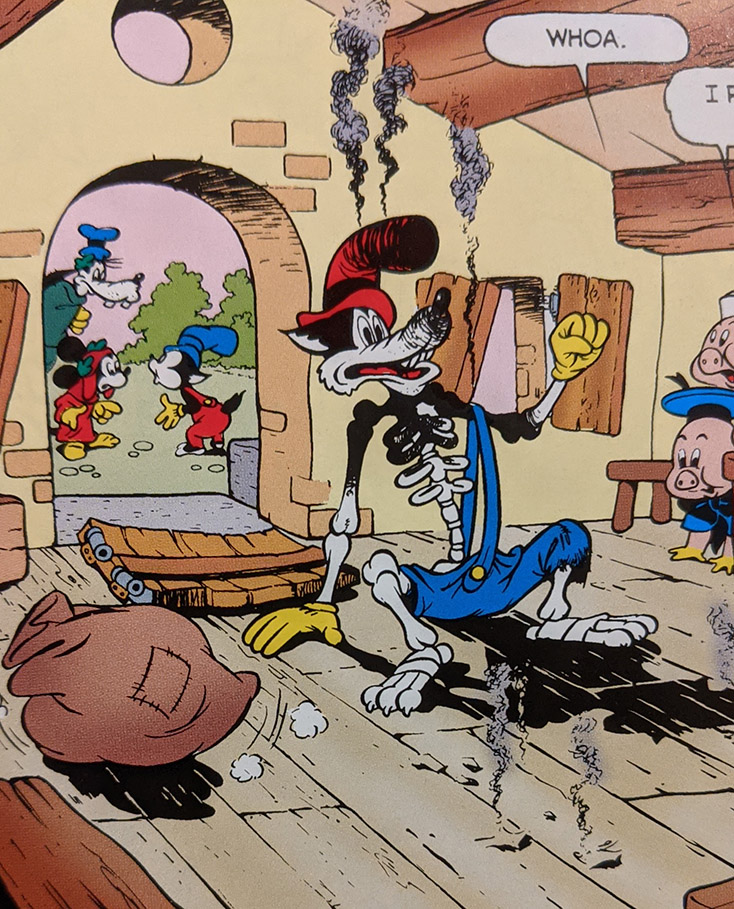 But can we really blame the wolf for how he was born?
You bet! Not only that, here we can bring him right back,
Just so we can all blame him once more.
For in the Inferno, there’s never a lack
Of penalties, and plenty of time
To give every villian eternal whacks!

This seems awfully Calvinist for a Disney production.

One little aside, after a series of little asides. There’s a sad scene late in Inferno where Dante meets a beloved mentor, tormented for violence against the self by being forced to move restlessly forever across a plain under a sky that rains fire. This, it seems, is the punishment for sodomy, and Dante’s mentor is in that particular malebolgia.

GLBTs in Italy had been free from legal prosecution since 1889, when the Zanardilli Code abolished legal differences between homosexual and heterosexual relationships. Fascist governments tend to repress both women and LGBTs, so under Mussolini and as recently as 1945 there had been persecutions of homosexuals.

While I don’t know much about the sexual politics of Italian funny animal comics in the 1950s (that would be a bit of an ask even for a pedantic gay furry like myself), I suspect that having an obviously gay character turn up as Mickey’s former mentor would have been…edgy, to say the least. But in a period where such a character might have been living with new fear and regret after a lifetime of legal freedom, it’s a bit of a tear-jerker that Mickey’s mentor is in hell because of the sin of not being true to himself.

Of course the comic ends happily ever after, it’s only a dream, and Dante himself wearily writes the characters out of his comic. He, and the authors, close with a prayer for Italy…and, as a contextual note, World War II was not even three years in the past during the writing of this comic. Italy could use a little prayer.

Oh my country, lift our head worn from suffering,
Smile once again, oh, beauty among beauties,
Oh, mother among mothers, cease your weeping!
The sky lights up for you; sparks fly free
Shining to brighten your path even now
So that you, once more, the stars may see!

I don’t think that this comic could be written today, but I can imagine the need to step out of hell on a flying literary device and emerge in the stars. Perhaps this was the Disney title the world needed in 1950.

Thanks muchly for indulging this little aside! – Jacob 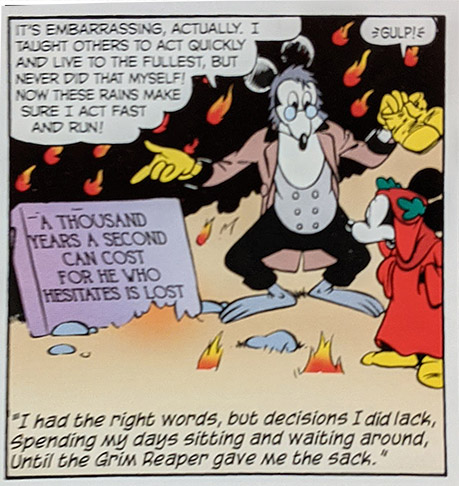