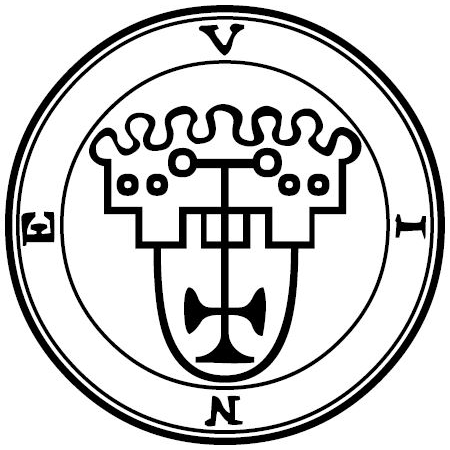 With a bit of variation, takes the form of a soldier with lionlike features, riding a black horse, with a viper in one hand or a serpent in his arms.

As a king, or an earl, Vine has a broad range of powers – the usual “prophecies of past present and future” or course, but also raises towers and bulwarks and knocks them down again, He also knows rather a lot about witches (particularly their identities) and will happily share that knowledge.

He’s a spirit of lust, who “continually procureth venery,” but particularly between a man and wife. In today’s oversexed world, this seems kind of charming, but remember that sex was frequently considered sinful, and sex between a man and wife was just the least sinful. Sexual desire to distraction, even for one’s spouse, is still against God’s will….though within the safe bounds of marriage, it’s perhaps a more subtle distraction. On the other hand, the idea of the nuclear family is in many ways a product of the feudal era, the “man and wife as the foundation of society” comes from the same medieval world that created Vine. Creating lust within the context of a marriage is, societally, like building walls and towers.

Interestingly, most of the Goetia are described as having legions of demons under them, particularly one with a title like “king.” Vine didn’t, at least in Pseudomonarchia Daemonum. Don’t know exactly what that means, but since he’s got strong tactical abilities to create walls, towers, and other fortifications, he may serve in a different capacity in Hell’s armies.

The note about consecrating books, and his obvious dislike for witches, might set him up as some sort of witch-finder, or a champion of the more cerebral demonology of the Grimoire school. Over time grimoires were written with an audience of nobles and lords in mind, and “scholar with a sword” may have been an appealing image.

Demonic Paradise suggests that Vine is exceptionally powerful and tricky and can take someone’s soul without permisison, but that is 1) unsourced, 2) not repeated elsewhere, and 3) seems outside the general style of a typical grimoire. But as a king of hell…maybe?