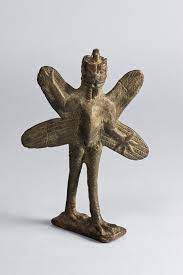 He who holds the head of evil, he who offers misfortune

A fairly typical “demon of assorted problems,” MRL was associated with headaches, mood swings, and raving, where the afflicted “continually behaves like an animal caught in a trap.” He was associated with a host of bad omens, including a curse that makes someone continually see dead people and ghosts. Or perhaps MRL itself was a ghost? Many Mesopotamian demons were.

One of the more interesting aspects of this creature whas that he was associated with mukīl rēš daniqti, a spirit that offered good things and good omens. The two followed people around, in a sort of good prophetic cop/bad prophetic cop duality, offering blessings and curses. I suppose you couldn’t pick which one you got…or necessarily even knew which one was which.

Predictably, there’s a lot less written about the good guy than the bad guy.