From the episodes of “Helluva Boss” thusfar, the princes of the various hells are likely based on Binsfeld’s Classification of Demons. The Prince of Sloth in that hierarchy is “Belphegor,” whose name is somewhat similar to “Baphomet.” It’s possible the candle-headed demons that appear as background characters are related to one or both of these demons, though Baphomet is not generally listed as a prince of hell. 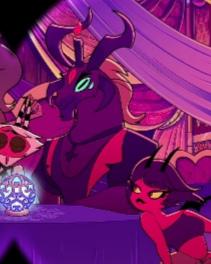 The “de facto” image of Baphomet is Eliphas Lévi’s interpretation from 1854, which was based on older images of same, and resembles the Devil card in the Tarot. In the heresy trials of the Knights Templar, he’s also described as a cat, a severed head, or a three-headed creature, though as Bellanger points out, confessions under torture aren’t reliable. Levi’s image is hermaphroditic, and this half-animal, dual-gendered figure may be intended to express dualism and balance (and, according to Levi, intelligence, the four elements, motherhood and the male principle, sin and redemption, good and evil: pretty much everything.)

A newcomer to the demonologies. Baphomet’s name may be a corruption of “Muhammad.” He was strongly associated with the Knights Templar as the demon they worshipped, giving the spirit an early association with heresy (more of this background in Baphomet’s Wikipedia entry). Crowley incorporates Baphomet into his Thelemic mystical system, emphasizing the spirit’s place as a dual-gendered  creature and identifying it with the devil, while stressing that the devil is not evil, but an ally of mankind. Crowley also named himself Baphomet, do with that what you will.

Baphomet’s androgynous depiction and its association with the Knight’s Templar (accused of homosexuality, among other things) and Crowley’s frequently homosexual sex magic gives this spirit a strong queer energy, though not always a positive energy, given their witch-trial origin. Their sense of being constructed from parts may also be significant for a community in which identity-building is so fundamental.

Baphomet has an active life in pop culture as a stand-in for Satan and a symbol of the modern Satanist movement. Pop culture has embraced the figure as simultaneously the devil and perhaps a more thoughtful, cerebral devil. They’re s also something of a constructed entity, a chimera created to emphasize dualism, rooted in a propaganda war against the Knights Templar some 700 years ago. Depending on your approach to belief, they may be a young spirit, freshly created with ancient memories.