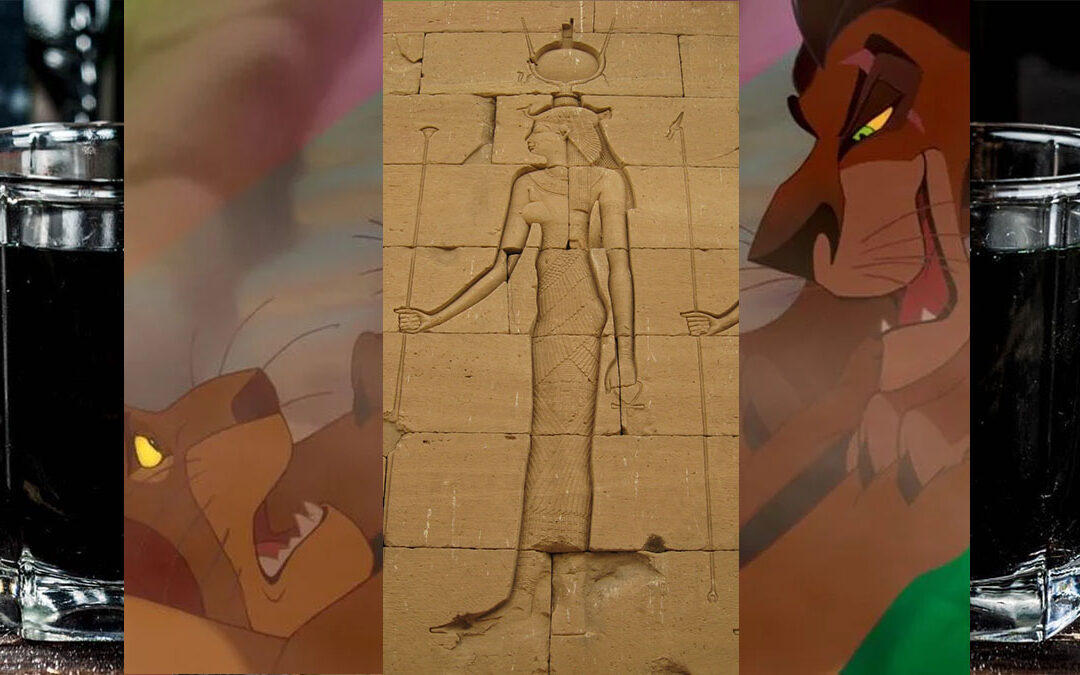 Care to join us? Just starting out here, but if you want to chatter with us, stop by and say hi!

This week, we walk very slowly through The Osiris Myth, which is the best-known story from Egyptian mythology (and we’re feeling like it may be the only surviving story now…) Mostly as a way to talk about a few of the brighter Egyptian deities, Osiris, Horus, Isis, and Set. Aaaand I think we’re entirely off-topic, for the podcast at least, we don’t go to hell at all! But it’s a part of the picture here and there’s a little more to touch on later.

Victoria brings a rich black licorice liqueur to the party, in honor of the black goo the Egyptian funerary-industrial complex poured over everything like Paula Deen and melted butter. But mostly because Victoria loves licorice. Jamin brings a bowl of a Persian-Mexican fusion called “Guac Like an Egyptian.” But because we’re in Hell, we couldn’t find any pita 🙁 They only had that really thin-sliced pumpernickle that crumbles, which didn’t work at all. 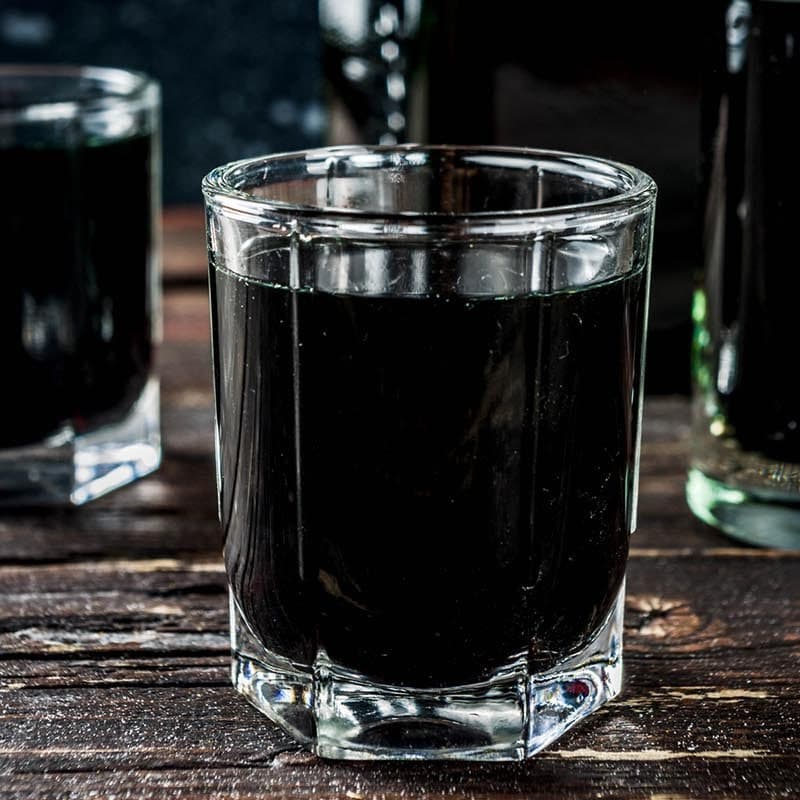 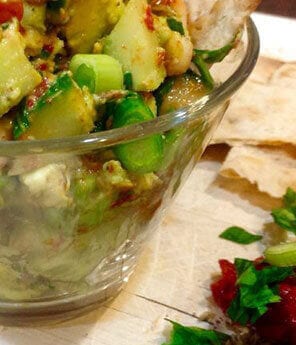 Meanwhile, in the circle of Hell that is Texas, the nation’s most restrictive anti-choice laws were put into effect, which deputizes abortion vigilantes in a way that makes it very hard to challenge the law (because you’d have to sue Bob, not Texas.) It’s just ugly top to bottom.  We’re watching The Satanic Temple’s lawsuit now, which argues that a harsh abortion law violates TST’s religious freedom (largely because “our bodies belong to ourselves” is baked into their tenets, expressed in a sacrament…or at least a personal ritual, which is conceptually similar. Will this hold weight as an argument? Or is it just clever? Given that the entire political argument over abortion is cynical public theater anyway, who can say. Anyway, this isn’t a political podcast. TST talks more about their strategy on their Reproductive Freedom fundraiser. Then there’s the “TikToker joins TST to circumvent body piercing” article. Jacob doesn’t know why he thought this took place in Texas. This makes the argument seem just a bit trivial but maybe there’ll be some post-2020s world where we don’t spend tax dollars to control other people’s bodies, and who knows what will bring that closer.

Jacob doesn’t recall ever seeing the music video for “Rock Me Amadeus.” But it might be improved by the wailing of two-headed hell worms. As of when we’re making these show notes the embed coding for the videos below (Amadeus, Tusk, Winds of Change) weren’t working, maybe that will change?

The Osiris Myth is the big sweeping epic we’ve inherited from ancient Egypt. And to some degree it’s the only big story we have? Is that fair? I wouldn’t base a masters’ thesis on that statement but besides creation myths, it’s hard to find any other stories.

The basic framework, individual details vary a lot: For some reason, the chaos god Set is angry at the harvest god Osiris, and has him killed and dismembered. Big O’s wife pines for some time, reassembles most or all of the parts, reanimates him, and before he goes to the underworld they have one last roll in the papyrus, and thus their son Horus.

Big O goes to the underworld to be the Duat King. Isis goes into hiding with baby Horus, fearing the anger of Set. With magic, and possibly the help of Thoth depending on who you ask, Baby Horus grows up.

During that time, Set takes the throne, but obviously this doesn’t go very well

Then there’s the epic conflict between order and chaos, which can go on for 70 year of divine spy-vs.-spy conflict as these two fundamental forces push against each other…though it often seems stylized and controlled, no-one gets shivved in an alley, this is a fight for dominance, not destruction. Many little stories pop up around this rivalry, which suggests that it’s more “for many years” or even “the eternal struggle.” Remember, something can be a day, a year, and forever in a myth, that’s not a conflict.

Then there’s the resolution. Surprise, Horus/Order/Monarchy/Civilization triumphs over Set/Chaos/Wilderness/Storm! The lands are divided–this trope is important in other myths. In a Mesopotamian tradition the god El distributed the regions and peoples of the world to his children, including Yahweh, who was given command over the people of Israel. Curious to see how pervasive this “partitioning the lands” myth is. And interestingly, Yahweh may have first appeared in Edom around 1200-1000, an area with extensive trade between Egypt and Mesopotamia..

TBH the entire mythology of Egypt is best summarized by the masterful collection of commentary and wisdom relayed in “Stick Figure Gods.” 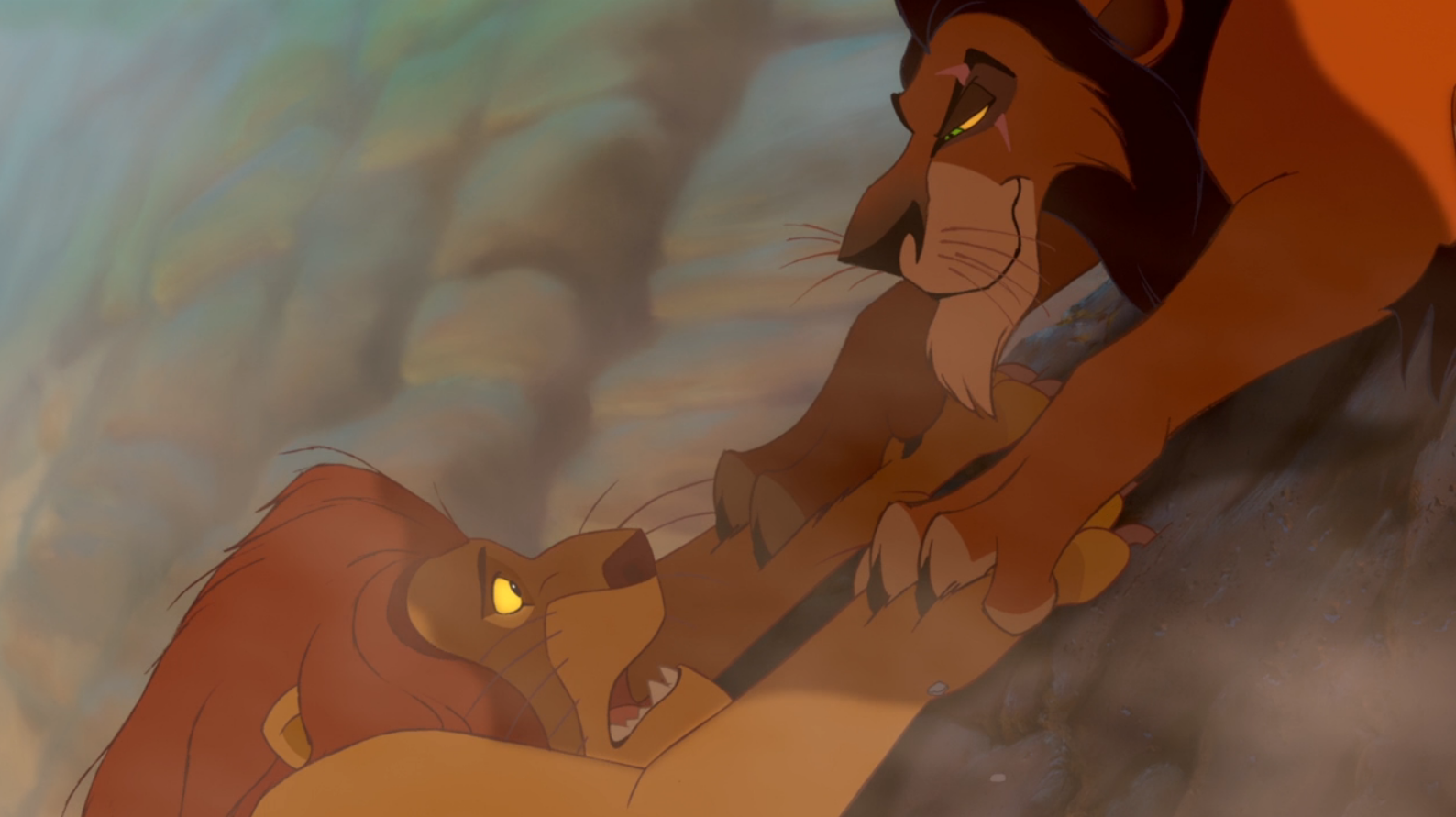 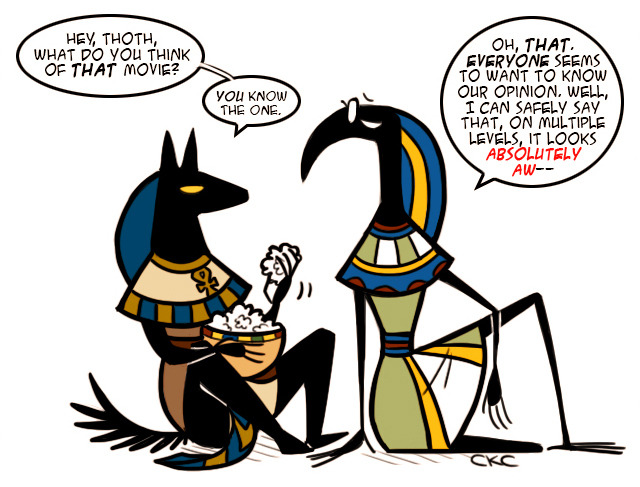 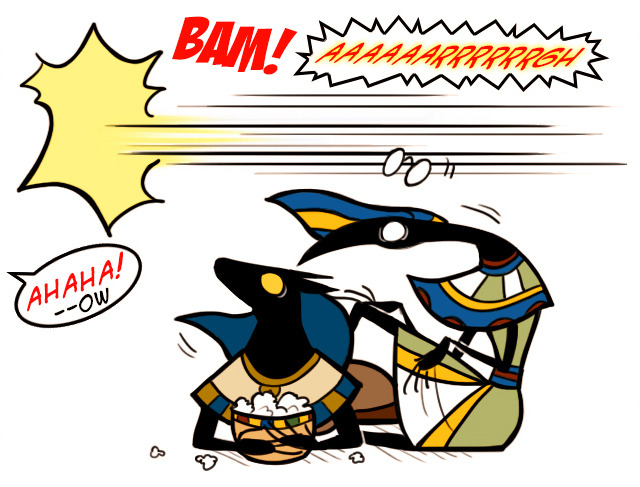 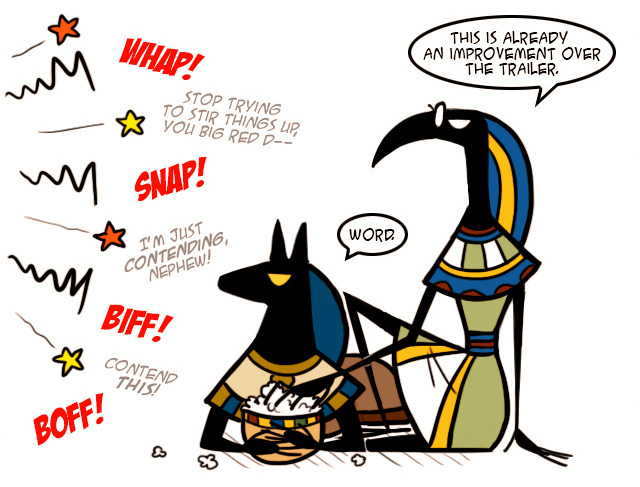 Osiris seems to have begun life as a fertility and agriculture god, and just possibly is a divine version of a shepherd-king from before Dynastic Egypt. He generally looks like a pharaoh, with a green or black color – the colors of vegetation and rebirth, or the color of the soil of the Nile. His mythology seems to have changed some time in early Old Kingdom Egypt, around 2600, when he starts becoming associated with the land of the dead, and becomes the father of Horus.

In his role as the all-purpose underworld god, he presides over the judgment of the dead (although Anubis or a 42-person committee is more the actual judge), and rules the kingdom of Osiris in the underworld, where the blessed dead go. One of his names as a god of the dead was “Wenennefer,” or “he who continues to be perfect.” Great name.

His worship lingered until ~450 AE, when the last pagan temples were cleared out, although there may have been observances of some sort into 550. Osiris and Isis were the last “living” Egyptian gods. 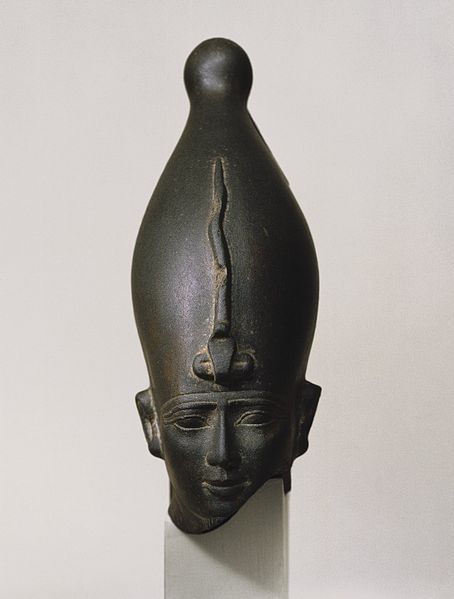 Isis was big. One of the most popular deities in Egypt, she gradually took on traits from most of Egypt’s other goddesses, had more magic than all the other gods,, protected the land, even had some of the powers of a goddess of fate. Like many pagan gods she faded as Christianity rose in the 400s-600s, but she influenced many classical gods, and possibly depictions of the Virgin Mary as well. Some of her names – “queen of heaven,” “mother of the god,” are reflected in Mary. Even after the lights were out on Egypt, Isis and “Serapis” (the later incarnation of Osiris) were worshipped as enthusiastically as the Roman deities.

Isis held on to her influence as a goddess of magic: as she passed her knowledge on to Horus, later, she passed it on to Hermes Trismegistus, and the mysteries of Isis became a part of hermetic mysticism, which drew on Egyptian ideas. The theosophists embraced her in 1877 (in Blavatsky’s book “Isis Unveiled.” Over time she seems to have become something like the default mother/magic goddess figure.

Jacob word-drops “summodiestic,” or at least “summodeism,” from the same root as, say, “Summit.” This is the idea that various deities are aspects of a chief god, for Isis, we’re more going with the idea that Isis becomes the main character in almost any mother-goddess scenario.. Your worship form may vary, but all mana goes to the same basic higher power.

So far as scorpions go, the seven scorpions were Tefen, Mastetef, Petet, Tjetet, Matet, Mesetet, and Befen. Isis was hiding from Set at the time, and was going to the marshes, but stopped by the house of Ursert, a rich woman, to get some shelter for the night. Since Isis looked like a beggar with scorpions, the woman slammed the door, but another poorer woman down the way let her stay…but her scorpions (and one must ask, why the scorpions?) were stil feeing stroppy, so they stung her son as close to death as narrative would let them. Isis magicked away the poison, and the rich woman felt really bad about everything and gave everything she owned to the poor woman. And that’s the story.

So this gets confusing. Not only was Isis a transforming in the general style of Shazam, and in fact appearing WITH Shazam, she was also. in the same comic continuity, a goddess worshipped by the Bana-Mighdallian Amazons.

She had the usual range of powers – phasing through matter, super strength, flight, telekinesis (that’s a little bit odd), controlling the elements, and stopping time. But really, anyone can do that. These usually required a little ditty, along the lines of “oh zephyr winds that blow on high, lift me now so I can fly!” or maybe a tranformation sequence triggered by saying “I Am Isis!”

Learn more about her in this fascinating documentary video. 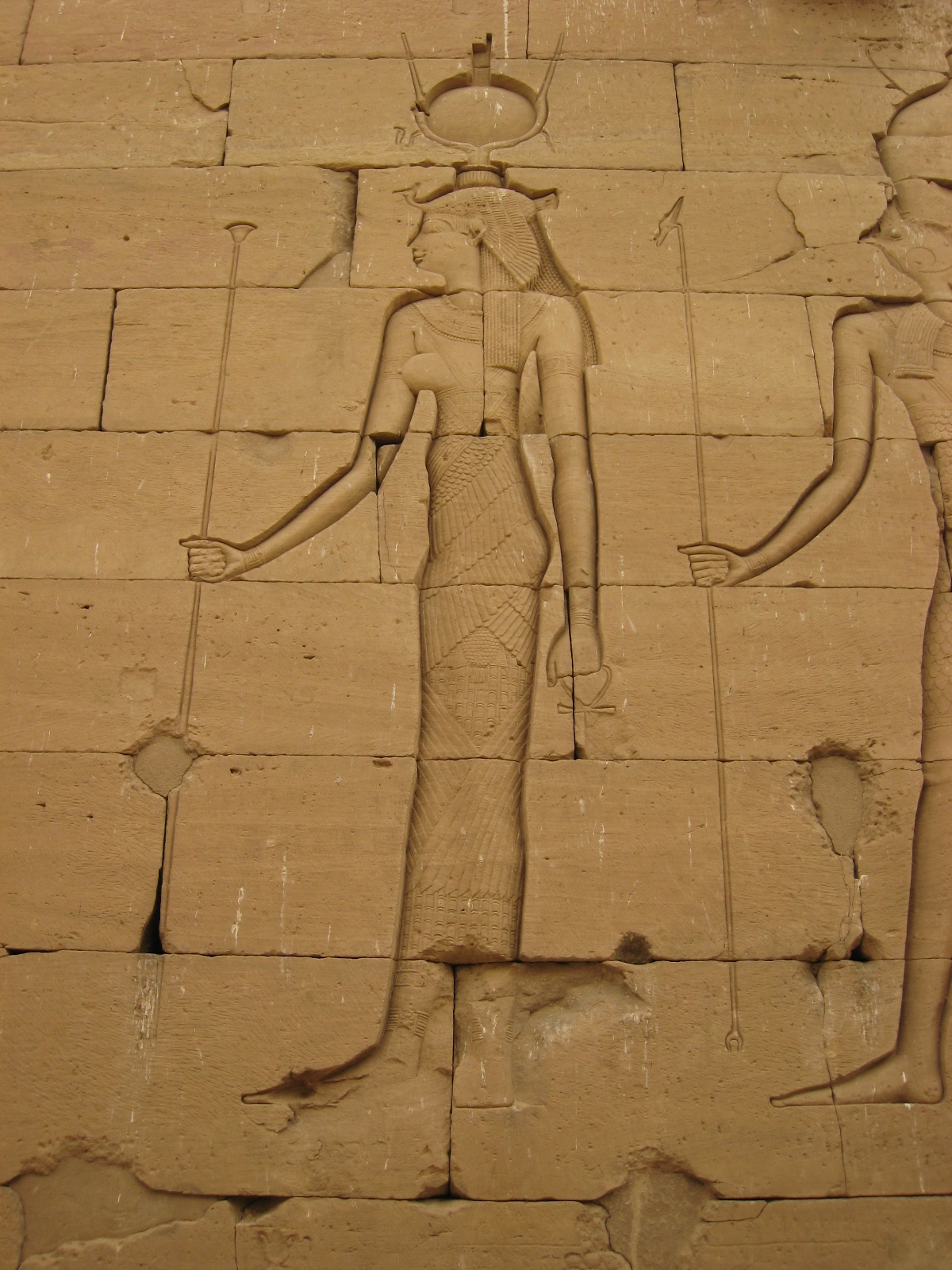 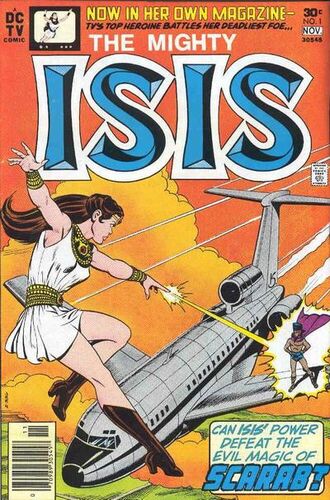 So! As far as I can tell, each pharaoh had a god on their hat. Or really, on their serech, which is a little ornamental nook over the palace door. So not on their hat. The Horus Name is a reference to the god and some sort of pithy text about the god,, like “Per-en-ma’at, or “he who achieves Ma’at.” Though usually it was a warrior serekh for a warrior king. Horus was a common choice…although King Seth-Peribsen had both a seth-animal and a hawk for his serekh. 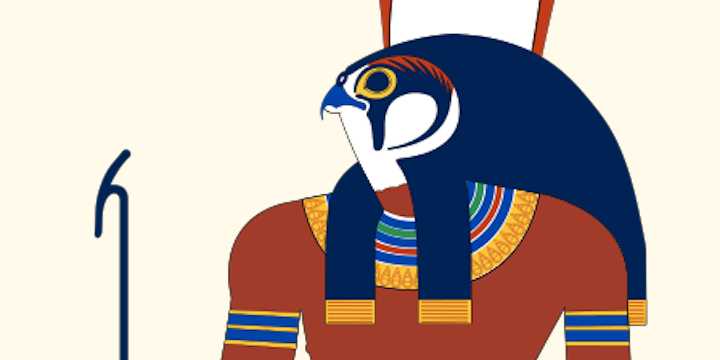 My Sons, My Jars

Rarely is it asked, why are Horus’s sons canopic jars? There you are. Probably because Egypt had a god for EVERYTHING. And so from left to right in the illo, Qebehsenuef, the falcon, watched over intestines. Hapi, the baboon, watched over the lungs. Imsety, the human, was in charge of livers. Duamutef, the jackal, watched over the stomach. You put these in jars during the embalming process so that they were on hand and useful. No, no-one kept the brain, it was just something that made mucus. 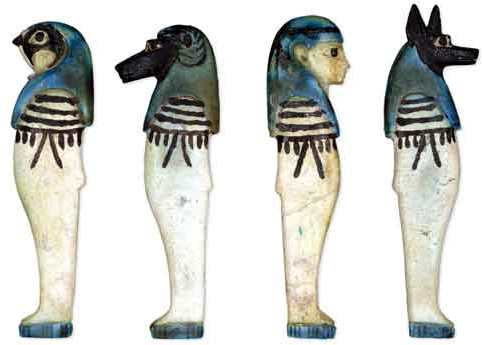